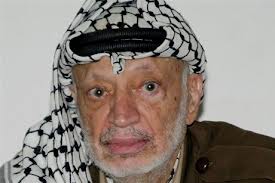 Swiss radiation experts have confirmed they found traces of polonium on clothing used by Yasser Arafat which “support the possibility” the veteran Palestinian leader was poisoned.

In a report published by The Lancet at the weekend, the team provide scientific details to media statements made in 2012 that they had found polonium on Arafat’s belongings.

Arafat died in France on November 11 2004 at the age of 75, but doctors were unable to specify the cause of death. No autopsy was carried out at the time, in line with his widow’s request.

His remains were exhumed in November 2012 and samples taken, partly to investigate whether he had been poisoned — a suspicion that grew after the assassination of Russian ex-spy and Kremlin critic Alexander Litvinenko in 2006.

That investigation is ongoing, conducted separately by teams in France, Switzerland and Russia.

In the Lancet report, eight scientists working at the Institute of Radiation Physics and University Centre of Legal Medicine in Lausanne said they had carried out radiological tests on 75 samples.

Thirty-eight samples came from Arafat’s belongings, including underwear, a shapka hat, toothbrush, a hospital cap and sportswear, that were provided by the Palestinian leader’s widow Suha Arafat.

These were checked against 37 “reference” samples of cotton clothing that had been kept in an attic for 10 years and protected from dust.

“These findings support the possibility of Arafat’s poisoning with polonium 210.”

The polonium samples were measured at “several mBq,” or millibecquerels, a unit of radioactivity.

Computer modelling, which calculates polonium’s very fast decay, found that these levels “are compatible with a lethal ingestion of several GBq,” or several billion becquerels, in 2004, they said.

In addition, says the report, Arafat’s clinical symptoms “could not rule out” polonium poisoning.

These include nausea, vomiting, fatigue and abdominal pain.

“Since ingested polonium 210 is eliminated partly through faeces, the gastro-intestinal syndrome, associated with multiple organ failure, could be a predominant cause of death,” the authors suggest.

They acknowledge, though, that Arafat showed no hair loss or decline in bone marrow activity — symptoms that typically occur in radiation poisoning.

The team regret that no post-mortem investigation was carried out after Arafat’s death.

“An autopsy would have been useful in this case because although potential polonium poisoning might not have been identified during that procedure, body samples could have been kept and tested afterwards.”

On July 3 2012, one of the authors, Francois Bochud, who is head of the Institute of Radiation Physics, told Al-Jazeera that the team “did find some significant polonium” in Arafat’s belongings.

“If (Suha Arafat) really wants to know what happened to her husband (we need) to find a sample — I mean an exhumation — should provide with a sample that should have a very high quantity of polonium if he was poisoned,” he told the Mideast TV news channel.

Beatrice Schaad, head of communications at the Vaudois University Hospital Centre (CHUV) which is in charge of the institute, said the case report was the “scientific version” of what was given to the media.

“There is nothing new compared with what was said” in 2012, she told AFP. “There is still no conclusion that he was poisoned.”