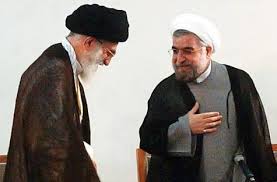 Behind Iran’s overtures to Washington lie pent-up pressures for change – from sanctions and internal dissent to regional turmoil – that are shaping a rare chance to end decades of hostility.

For new President Hassan Rouhani, speed is of the essence.

As well as addressing these pressures, Iran may be hoping its softer tone in nuclear talks with the West will bring longer term opportunities, diplomats say.

Ultimately Tehran desires Western recognition of what it sees as its legitimate interests in the wider region – in Syria and Lebanon where Shi’ite Muslim Iran supports the interests of its co-religionists and in its ‘backyard’ the oil-producing Gulf, where Iran seeks to expand its influence.

For now it is the threats that appear uppermost in the thinking of the Islamic Republic, as it surveys its diminished economy and regional upheaval.

Shaul Bakhash, professor at George Mason University, Virginia, said he believed Rouhani realized how seriously the economy had been hurt by the confrontational policies of his “disastrous” predecessor Mahmoud Ahmadinejad.

“ADULTS” ONCE AGAIN IN CHARGE

Rouhani’s opening to Washington was ‘not a bluff’, he said.

“Adults are once again leading the Iranian government.”

Iran is adept at surviving economic pressure, but sanctions have bitten deeply. Existing U.S. and EU measures have reduced Iran’s oil exports by more than half from pre-sanction levels of about 2.2 million barrels per day (bpd), costing Tehran billions of dollars in lost revenue a month.

The U.S. Congress could soon pass a bill to squeeze Iran’s oil exports further. Deeper cuts in oil sales, if accomplished, could worsen the damage Western sanctions have already done to Iran’s economy, which suffered a loss of about $26 billion in petroleum revenue in 2012 from a total of $95 billion in 2011; soaring inflation; and a devaluation of its currency, the rial.

Iran had the ability to adjust to sanctions, a July 2013 research paper by the U.S. Congressional Research Service (CRS) said. But it added: “The election of Rouhani … suggests that sanctions are affecting political outcomes in Iran.”

Mehrdad Emadi, an economist at Betamatrix consultancy, said knock on effects of sanctions on businesses included lack of investment and job losses. In the car and related components sector, about a third of workers had lost jobs in an industry that is Iran’s largest after oil, he said.

As before, a key immediate goal for Tehran is to win acceptance of its right to enrich uranium under a nuclear energy program it says is entirely peaceful but which the West suspects is aimed at developing a nuclear weapons capability.

But what has changed is that powerful conservatives within the factionalized leadership including Supreme Leader Ayatollah Khamenei have assented to Rouhani’s opening, signaling they are willing to explore the compromises essential to any deal.

They went along with Rouhani, diplomats speculate, largely because his big June election win revealed the depth of anger over years of economic mismanagement and the extent of popular support for his aim of ending Iran’s international isolation.

“People wouldn’t have been so vocal in their dissatisfaction without such tough sanctions. They applied soft pressure and translated dissatisfaction into voting,” said Emadi.

As they tackle a nuclear dispute that for years has been a potential flashpoint for a regional war, Iran’s nuclear negotiators now have the challenge of rebuilding confidence with the West while not being seen to cave in to Western pressure.

However they go about that task, speed is critically important.

A MAN IN A HURRY

Rouhani’s comment to the Washington Post that a deal should be “a question of months not years” suggests he must show quick results to keep security hawks hostile to the West on board.

“He is a man in a hurry,” said Bakhash. Conservatives were likely to overwhelm Rouhani without swift and significant sanctions relief, he said. When Rouhani returned from New York, a small group of hardliners threw eggs at his car.

A diplomat in Tehran said drawn out negotiations without any progress could easily “re-create the distrust between the United States and Iran, and thereby prevent achieving any results”.

The United States and Iran have had no diplomatic relations since 1980, shortly after students and Islamic militants stormed the U.S. Embassy in Tehran.

The two nations remain divided over myriad issues, from Iran’s backing of Syrian President Bashar al-Assad and suspicions in Tehran that the “Great Satan” wants to overthrow the Islamic Republic.

But the forces drawing Iran to the negotiating table are also numerous. Apart from sanctions, Tehran hopes a loosening of its international isolation will reduce the risk of a repeat of opposition protests that erupted in 2009 after disputed polls.

Iran has long worried about the threat posed by its own pro-democracy movement. The election of Rouhani is an outgrowth of this democratic impulse within Iranian society, said Afshon Ostovar, of the Center for Naval Analyses in Washington.

“Rouhani thus gives Iranians some hope that real and lasting change could be on the horizon,” he said.

Iran might also like to reduce the cost of its support of Assad. A top Lebanese security official said Iran was paying $600-700 million a month towards the cost of Hezbollah fighters in Syria. Those figures could not be confirmed.

Ali Vaez of the International Crisis group said the strategic imperative behind Iran’s new thinking was likely “greater than the sum of all these tactical reasons”.

The leadership probably fretted about its future “in the shifting sands of the Middle East,” he told Reuters. “They realize the risks of leaving behind a country mired in economic ruin, international isolation, and domestic discontent.”

A remark by Khamenei praising flexibility in dealing with one’s foes suggests to British expert Richard Dalton that the supreme leader wants the overture to Washington to give Iran the “tactical flexibility to test out what the opponent will do.”

Dalton, who served as Britain’s ambassador in Tehran in 2003 to 2006, said the aim would be to see if “win win, Rouhani’s declared goal, is achievable”.