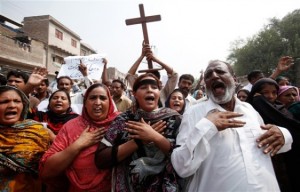 Terming Sunday’s suicide bombings on church in Peshawar in which 83 people, including children and women, were killed as terrorist act, Pakistan’s religious leaders have said killing innocent minority members was un-Islamic.

He said a decree was issued by 30 religious leaders, which termed the attack not only un-Islamic but a criminal act and a major sin. “Islam does not allow attacks on innocent minorities and makes it mandatory to protect their lives and property.”

The decree said it was duty of the government to provide security and protection to minorities. “Islam teaches that places of worship of non-Muslims should not be demolished or damaged,” it said.

It said those who attacked Christians in Peshawar in Pakistan’s restive Khyber Pakhtunkhwa province had “mutilated the face of Islam”. “In Islam murder of an innocent human being is the murder of the entire humanity,” the decree said.

The decree further said while Pakistan government was making peace overtures, militant group Tehreek-e-Taliban Pakistan (TTP) continued their terrorist activities, most recently with the bombing of a Peshawar church.

“The government without receiving any assurances from Taliban have released many terrorists. Talking to militants who had killed hundreds of Pakistanis amounts to rubbing salt on the wounds of the bereaved,” it further said.

The decree urged Pakistan government to bring the perpetrators of the Peshawar church attack to book. “They havë also violated constitution of the country which guaranteed complete protection to the minorities.

SIC chairman Hamid Raza Rizvi said the organisation would continue to oppose talks with TTP militants. “We condemn all acts of terrorism and would continue to do so. While Taliban were seeking guarantees before dialogue in the form of prisoner releases, they were not even prepared to guarantee a ceasefire during the talks,” he said.

A splinter group affiliated with TTP has claimed responsibility for Sunday’s suicide bombing on church in Peshawar.

‘Religious places can’t be attacked even during Jehad’

The religious leaders said even during the course of ‘announced Jihad’, nobody is allowed to attack religious or worship places of any religion. “In the presence of all these teachings and orders of Islam, such attacks using the name of the religion are meant to defame the religion of Islam and the Muslims”.

“The attacks continue despite government’s talks about peace. Muslim leaders must speak out against acts of terrorism carried out in the name of jihad”.

Several other prominent religious leaders have also condemned the suicide bombing on church and termed it a terrorist act.