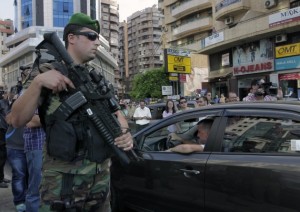 Lebanese troops started Monday afternoon deploying in Hezbollah’s stronghold of Dhahieh , a southern Beirut suburb under an agreement with the Shiite militant group that will see the army assume control of checkpoints in the area.

Approximately 800 internal security personnel and army troops were deployed and immediately started taking over checkpoints set up by Hezbollah.

It was a rare visible deployment by the army in a bastion of the militant group, which usually controls its own security with a tight grip.

An AFP journalist at the scene said the deployment was taking place in stages, with Hezbollah members still visible at some checkpoints on side streets in late afternoon.

The security points were established after two car bombings in the southern suburbs, which wounded more than 50 people on July 9 and killed 27 on August 15.

Following the bombings, Hezbollah turned the southern suburbs into a fortress with guards in civilian clothes policing the streets, stopping and searching cars, and asking motorists for their identity cards.

Hezbollah had always kept a tight grip on the area but it had not previously been so visible, and the checkpoints reinforced allegations that the group was functioning as a “state within a state.”

Earlier this month, tensions over the security points led to a clash with Palestinian refugees that left one dead and four injured.

Interior Minister Marwan Charbel told AFP that after the deployment by the army, “no one else will be authorized to be present at the checkpoints.”

“The state must extend its control over all Lebanese territory,” he said.

Charbel toured the southern suburbs as the deployment began on Monday and stressed that it was being carried out “with coordination between the state and all parties.”

Hezbollah has said that it backs the deployment and will ensure it proceeds smoothly.

Analyst Paul Salem, director of the Carnegie Middle East Centre, described the deployment as “positive,” but said Hezbollah will retain control over security decisions that affect it.

“It takes decisions on major security matters in the country without consultation… and it is an independent strategic player and moves without regard for the will of the state or Lebanese public opinion,” he said.
AFP