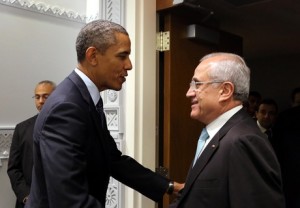 US President Barack Obama is praising Lebanon’s generosity in welcoming refugees fleeing the crisis in Syria.

Obama met with Lebanese President Michel Suleiman Tuesday on the sidelines of the United Nations General Assembly. The meeting came just after Obama announced $339 million in additional humanitarian aid in response to Syria’s crisis, including $74 million for Lebanon.

Suleiman says Lebanon has had a difficult time dealing with the influx of refugees. His country has a population of about 4.5 million and now officially hosts more than 700,000 registered refugees. Suleiman has estimated at least 1 million Syrian refugees are in Lebanon, with thousands more crossing over each week.

PRESIDENT OBAMA: It’s a great pleasure to have the time to meet with President Sleiman of Lebanon. He has shown extraordinary leadership through a very challenging period for not only Lebanon, but also for the region. I appreciate his courage and determination to maintain Lebanon’s unity and stability, and he has the full support of the United States in his efforts to uphold Lebanon’s sovereignty and independence.

I commend the President’s efforts in insisting that all parties in Lebanon refrain from engaging in the Syrian conflict. The United States strongly rejects Hezbollah’s deep involvement in the Syrian conflict, which at this point has displaced millions of people and threatens to destabilize the region. We are pleased that there may be progress in getting rid of Syria’s chemical weapons, which I think would be important for the security not only of the Syrian people but also for neighbors like Lebanon. And we will continue, as I said in my speech this morning, to press for a resolution of the Syrian conflict so that the rights of all Syrians are upheld, including Christians.

The Lebanese people have been tremendously generous during this difficult period, welcoming hundreds of thousands of refugees from Syria into their homes and their villages. The United States is providing over $254 million in humanitarian assistance to assist refugees in Lebanon in communities that are hosting them. And as you heard me say today, I think it’s very important for the international community to step up to do even more.

So, Mr. President, thank you for your strong efforts in maintaining unity and stability in Lebanon. You should feel confident that the United States will work very hard not only with you but also in encouraging the international community to provide the support that Lebanon needs at this difficult time, and to deal with the spillover of the crisis in Syria. And thank you for taking the time to meet with me today.

PRESIDENT SLEIMAN: (As translated.) At the outset, I would like to thank President Obama for fixing this meeting that I consider very important in this period that Lebanon and the Middle East are going through. It is indeed a very difficult period because Lebanon lives in between various conflicts and crises that are now posing a threat to all of us.

The United States of America has provided continuous support to Lebanon. It has supported the political process. It has supported the Lebanese Armed Forces. And today we have heard President Obama declare the allocation of $8.7 million additional for the Lebanese army, aside from the assistance provided by the United States to support the refugees in order to enable us to host them, and, of course, the United States’ contribution to the adoption of the presidential declaration by the Security Council on the 10th of July, which constitutes a road map for the support of Lebanon on all levels.

At the eve of the international meeting for the International Support Group for Lebanon scheduled for tomorrow, the 25th of September, we do hope that the United States will have a great contribution to this meeting in order to provide further political and economic support for Lebanon, as well as support for the Lebanese Armed Forces and the necessary support to assimilate or to take in the Syrian refugees.

Of course, taking in the Syrian refugees depends on Lebanon sharing the financial burdens of taking them in, as well as their numeral burdens, so we’re thinking of implicating or involving the states in hosting some numbers of these refugees. This, of course, requires to consider how they can be relocated and hosted in some safe zones inside Syria if further tension occurs, and working also on returning some of these refugees to Syria, to some safe zones, through the U.N. organization. Of course, Syria has plenty of vast spaces away from the conflict, where they can be relocated. And here we have to mention that the area of Syria is 18 times that of Lebanon.

At the political level, the Lebanese constitution, which was based on the Ta’if Accord, has set up a safety net, a political safety net in Lebanon, which helped it to get over all the crises. At this point of time, during this period, we need an international escort through an international safety net to spare us all the repercussions of the crises and conflicts going on around Lebanon.

On the other hand, we wish that the necessary impetus would be given to support the Lebanese Armed Forces to the five-year capabilities building plan in order to enable it to undertake all its mission regarding the defense exclusively of the Lebanese territories and countering the terrorist operations which have reached out to all the world. And Lebanon, of course, can be a victim of these actions, terrorist actions, as a result of the extension of extremism and terrorism in the region.

Of course, all these issues, they come in the frame of the expected solution in the region, and first of all, the solution for Syria. We hope that the American-Russian agreement about chemical weapons will mark the beginning of the process of finding a political solution that will ensure democracy in Syria as well as peace and security in its neighboring countries.

Of course, we have to talk about the ongoing negotiations under U.S. patronage between the Palestinians and the Israelis about the Palestinian-Israeli conflict. We hope that these negotiations will be a step towards comprehensive negotiations aiming at reaching a just and comprehensive solution for the Middle East according to the terms of reference of the Madrid Conference, the international resolutions and the Arab Peace Initiative. Of course, these negotiations, they affect the neighboring countries, and especially Lebanon, which have a pending fight in this context that relates to the settlement of the Palestinian refugees. Lebanon cannot accept the settlement of these refugees on its territory, according to the Arab Peace Initiative.

In all cases, we hope that attention will be given to the security of the Arab region. This region is characterized by culture and civilization and diversity. It is the cradle of the divine religions, and we hope that it will be taken as a strategic objective for peace in the Middle East and in the world.

Of course, this can be done by facilitating and preserving the presence of the constituents of these countries. I mean by that the civilization constituents which are deeply rooted in these countries. These are the minorities. We have to preserve a free and active presence of these minorities not only by catering for their physiological and security needs, but also by involving them in political activity of the country where they live, regardless of their numbers, but taking into account the civilization that these minorities represent.

PRESIDENT OBAMA: Thank you, everybody.