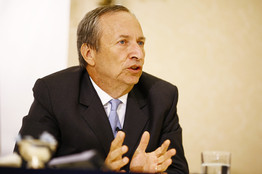 Lawrence Summers pulled out of the contest to succeed Ben Bernanke as chairman of the Federal Reserve after weeks of public excoriation, forcing President Barack Obama to move further down the list of contenders to head the central bank.

One leading candidate is Janet Yellen, the Fed’s current vice chairwoman, who has garnered substantial support among Democrats in Congress and among economists. But the public lobbying on her behalf appears to have annoyed the president, say administration insiders, and may lead him to look elsewhere.

Mr. Obama has said he interviewed Donald Kohn, a former Fed vice chairman who is now a senior fellow at the Brookings Institution. Administration insiders say Timothy Geithner, the former Treasury secretary, also is a possibility, though a person close to him reaffirmed Sunday night that he doesn’t want the job. Dark-horse candidates include Stanley Fischer, an American citizen who recently stepped down as governor of the Bank of Israel, and Roger Ferguson, another former Fed vice chairman and now chief executive of TIAA-CREF, the nonprofit pension company.

Mr. Summers, a former Treasury secretary who has been one of the president’s top advisers, withdrew in a phone call with Mr. Obama Sunday morning. In a subsequent letter to Mr. Obama, he wrote: “I have reluctantly concluded that any possible confirmation process for me would be acrimonious and would not serve the interest of the Federal Reserve, the Administration or, ultimately, the interests of the nation’s ongoing economic recovery.”

Mr. Obama said in a statement Sunday that he accepted Mr. Summers’s decision and described him as “a critical member of my team as we faced down the worst economic crisis since the Great Depression, and it was in no small part because of his expertise, wisdom, and leadership that we wrestled the economy back to growth.”

J. Bradford DeLong, a Summers backer at the University of California, Berkeley, said the decision to pull his name is “not something Larry would have done were he really the guy his adversaries claim he is.”

U.S. stock futures surged late Sunday after Mr. Summers withdrew his name, soothing investors who had expected him to quickly wind down the Fed’s easy-money policies.

Mr. Summers, who was director of Mr. Obama’s National Economic Council early in his presidency, was widely believed to be the president’s first choice. But opposition from liberals and women’s groups—and, importantly, from some Senate Banking Committee Democrats—had been mounting.

For them, Mr. Summers became a symbol—a caricature, his admirers say—of all the failures of financial deregulation that led to the 2008 financial crisis.

“He was very clearly the president’s choice,” a former top administration official said. “After all the problems they had with the base, a big confirmation battle looked like a bridge too far.”

Mr. Obama kicked off speculation about the Fed job in an interview with Charlie Rose in June in which he said Mr. Bernanke “had stayed a lot longer than he wanted or he was supposed to.” Mr. Bernanke’s second four-year term as Fed chairman expires Jan. 31.

The very public disclosure of Mr. Bernanke’s plans led to an unusually public debate over potential successors. In particular, critics seized on Mr. Summers’s reputation for abrasiveness, his closeness to Wall Street and accusations that he was hostile to women. The last was damaging given that one of his rivals was Ms. Yellen, who would, if nominated and confirmed, be the Fed’s first chairwoman.

“It’s shocking in the sense that Summers was so widely considered to be a front-runner,” said Jared Bernstein, a former economic adviser to Vice President Joe Biden, “I’m sure they were very carefully counting votes—including Republican votes—and just believed that they couldn’t get Larry out of committee.”

At least three Democrats on the committee had said they would vote against Mr. Summers, most recently centrist Democrat Jon Tester of Montana.

In late July, about one-third of the 54 Senate Democrats signed a letter to Mr. Obama urging him to pick Ms. Yellen; it didn’t mention Mr. Summers, but it was viewed as a warning to the White House.

Mr. Obama angrily defended Mr. Summers at a closed-door meeting with lawmakers, but he did little to thaw views among many liberal and centrist lawmakers that Mr. Summers was too combative and too close to Wall Street.

Ms. Yellen has in the past few months avoided substantive public comments on the economy or monetary policy. During the Fed’s annual gathering in Jackson Hole, Wyo., in August, she told several people she didn’t expect to get the job.

Mr. Summers’s decision comes at a moment of vulnerability for Mr. Obama. He was close to losing a vote in Congress to authorize military strikes against Syria until Russia offered a last-minute diplomatic solution.

The move also coincides with the fifth anniversary of the collapse of Lehman Brothers and the ensuing financial crisis. Mr. Obama has a series of economic events planned this week, including a Monday Rose Garden speech, an address Wednesday to the Business Roundtable and a meeting Thursday with his export council. On Friday, he will travel to a Ford Motor Co. assembly plant in Kansas City, Mo., to highlight the success of the government auto bailout.

Now, the week may be overshadowed by fallout of Mr. Summers’s withdrawal. But Tom Daschle, the former Senate majority leader, said he saw a silver lining. The withdrawal, he said, “significantly clarifies the president’s choices and enhances his ability to reach consensus in Congress.”