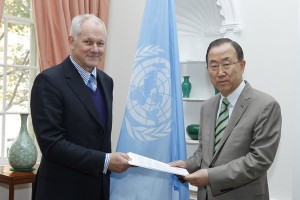 The United Nations on Monday is expected to release the much-anticipated results of an investigation into allegations of deadly poison gas attacks last month near Damascus.

The inquiry report was delivered Sunday to Secretary-GeneralBan Ki-moon, the U.N. said.

Conducting the inquiry was a U.N. inspection team headed by Ake Sellstrom, a Swedish scientist who is a specialist in disarmament and chemical weapons issues.

The U.N. contingent spent almost two weeks in Damascus, Syria’s capital, and visited several sites where chemical strikes were suspected of taking place in the early hours of Aug. 21 in several Damascus suburbs. The areas hit were all under nominal control of rebels fighting to oust the government of President Bashar Assad.

Amateur video images of apparent victims of the attack stunned the world. They included images of people, including children, struggling to breathe, foaming at the mouth and displaying other symptoms, as well as images of rows of corpses laid out in white shrouds.

The Syrian opposition said hundreds were killed and blamed the government. Syrian authorities said the rebels were behind the incident, aimed at sparking international intervention in the more-than-two-year civil war.

U.S. officials concluded that the Syrian military had carried out the attacks, apparently using rockets loaded with sarin gas, a deadly nerve agent. According to U.S. officials, more than 1,400 people died, including more than 400 children.

In response to the incident, President Obama planned punitive military strikes against the Syrian government. But the U.S. response was put on hold last week when Syria agreed to a U.S.-Russian plan to eliminate its chemical stockpiles under international supervision. Syria also agreed to become party to an international treaty banning the production and use of chemical weapons.

The U.N. investigators’ mandate was to determine whether chemical agents were deployed, but not to assess blame for who may have used them. However, experts say the findings will probably provide clues about who was behind the alleged attacks.