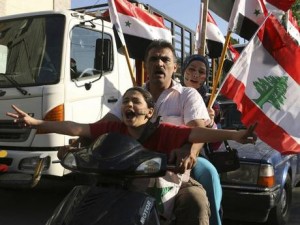 The streets of Beirut are full once again and café’s which were empty last week are buzzing.

Lebanon appears to be breathing a collective sigh of relief now that the US and Russia have reached a deal on Syria’s chemical weapons which postpones the possibility of military intervention, for now at least.

Throughout the region, reactions to the proposal have been mostly positive, with the Arab League hailing the agreement as “a step closer to a political solution” for the conflict.

Yet that is not to say that some in Lebanon believed that the threat of outside force would have pushed a solution.

“Perhaps it is going to be protracted conflict without the international community really making a real fist to end it,” says Dr Imad Salamey, a professor of political science at the Lebanese American University in Beirut. Many rebel factions on the ground in Syria, which had hoped US air strikes would tip the conflict in their favour, have condemned the deal, saying it has effectively left President Bashar al-Assad in a more powerful position.

The return to ‘normality’ (if it can be called that) in Lebanon means shelling from Syria has started again; two were injured by rockets falling on the Bekaa valley over the weekend. As the country’s involvement in the conflict next door deepens, Hezbollah fighters openly fight alongside Assad and Lebanese Sunnis fight alongside the opposition, and Lebanon has increasingly felt its tremors. Car bombs have targeted both the Dahiyeh, a Hezbollah stronghold, and northern Tripoli, where islamist and opposition flags now increasingly dot the streets.

Rather than the potential fall out of US intervention, Lebanese politicians have already gone back to bickering over how to form a government – something the country has been without since March.

Yet the festering conflict continues to take its toll on the Lebanese economy. Banks and businesses closed in recent weeks as the country’s Economic Committees went on strike against the political stagnation as business continues to suffer. The only group of manufacturers who refused to abide were those producing canned food; they are facing a surge in demand due to the presence of more than 730,000 Syrian refugees in Lebanonon alone.

Business owners complain that they cannot plan for the future because they are waiting to see what will happen next door.

Dr Salamey says he fears such instability could be lasting. Without resolution, “the conflict will stretch and eventually the limbo situation in this country will be permanent.”