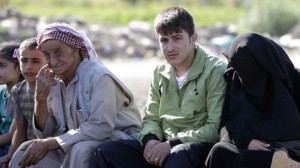 The Syrian civil war has displaced millions of people from their homes, as rebels continue to battle the regime of President Bashar Assad and the world ponders taking action against the government for its alleged chemical weapons attack last month.

Refugees fleeing the violence have flooded camps in neighboring Iraq, Lebanon, Jordan and Turkey, which alone has some 460,000 Syrians residing in camps near its southern border, according to the United Nations High Commissioner for Refugees (UNHCR).

While neighboring countries throughout the Middle East are the most logical places of refuge for Syrians, some have fled across the Atlantic to Latin America, where countries like Brazil, Colombia and Venezuela all have sizeable Syrian immigrant populations. Colombia has accepted all Syrian refugees seeking asylum, where they have been reported to the U.N. and enrolled in Spanish language classes. Brazil has also accepted 100 percent of the refugees seeking asylum, but is having trouble counting the number of Syrians who have entered as refugees.

“We assume that the number of Syrians living in Brazil because of the conflict is much bigger than the figure revealed by the official statistics,” said Andrés Ramírez, UNHCR’s representative in Brazil. He added that many of the new refugees were staying with family or friends and had not registered with authorities.

There are an estimated 3 million people in Brazil’s Syrian community, which is playing a key support role in taking care of the new refugees. The U.N. said that most asylum seekers – some coming as early as the beginning of the Syrian conflict in the spring of 2011 – have mostly gone to Sao Paulo, which hosts the country’s largest Syrian population.

A number of NGOs in Brazil along with the Syrian Orthodox Church are working to provide refugees with a number of services, including financial grants, Portuguese language classes, mental health work and aid in finding employment.

“UNHCR considers that the vast majority of Syrian nationals leaving their country under the current circumstances are in need of international protection,” Ramírez said. “We are glad to see Brazil keeping its borders open and processing asylum claims in a timely manner.”

In neighboring Colombia, the UNHCR and then non-governmental organization Pastoral Social have provided refugees with a number of integration services ranging from Spanish language classes to job finding tools.

Speaking to the United Nations, 25-year-old refugee Ahmed (he declined to give provide his last name) told the story of how he escaped Syria and made his way to Bogotá by way of sneaking across the border into Lebanon and flying from Beirut to Colombia.

“I got the refugee status after six months of having submitted my application. Now I don´t have to be worried about a visa anymore,” he said, asking that his identity be masked to protect his family still living in Syria.

Ahmed’s predicament is a common one for many Syrian refugees who struggle to find safety away from their war torn nation while worrying about family members left behind.

For his part Ahmed still keeps in contact with his family over the Internet, but makes sure to cover his tracks as his illegal exit puts his family in danger.

“People cannot move, cannot circulate, do not get medicine or food, and controls are more and more restrictive, especially at the border,” he said.

Fighting continues to be heavy between Syrian government forces and rebels as world leaders meet in Russia to discuss, among other things, the proposal by the United States of a military air strike on key Assad military outposts.

The conflict started in March 2011 as largely peaceful protests against Assad’s rule. It turned into a civil war after opposition supporters took up arms to fight a brutal government crackdown on dissent. Two years of fighting have led to a stalemate, with the rebels controlling much of the countryside in the north, east and south, and the regime holding most urban centers in the west, where the majority of Syrians live.

The four-decade iron rule of the Assad family long has rested on support from Syria’s ethnic and religious minorities, including Christians, Shiite Muslims and Kurds. The Assad family and key regime figures are Alawites, followers of an offshoot of Shiite Islam, while most rebels and their supporters are Sunni Muslims.

More than 100,000 people have been killed, with nearly 7 million people uprooted from their homes. U.N. officials estimate that 5 million have been displaced inside the country while another 2 million have fled to neighboring countries. The total amounts to nearly a third of Syria’s population, which was 23 million before the fighting began.

U.N. humanitarian chief Valerie Amos met with Syrian government officials in the capital, lobbying for access to civilians trapped in areas where fighting has raged.

After meeting with the president of the Syrian Arab Red Crescent, Amos told the AP that she is “extremely concerned that the situation on the ground is becoming worse.”