4 Russian ships head for Syria ahead of possible US strike 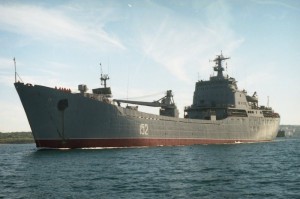 Three Russian naval ships were sailing toward Syria in the eastern Mediterranean on Friday and a fourth was on its way, the Interfax news agency reported, citing a source at navy headquarters.

Kremlin chief of staff Sergei Ivanov said Thursday that Russia was boosting its naval presence in the Mediterranean Sea, but primarily in order to organize a possible evacuation of Russians from Syria. He did not say how many vessels were being sent.

The prospect of increased Russian naval presence near Syria has stoked fears of a larger international conflict if the United States orders airstrikes over an Aug. 21 chemical weapons attack in a suburb of Damascus, the Syrian capital. The U.S. already has numerous war ships in the Mediterranean.

Two Russian amphibious landing vessels and a reconnaissance ship have passed through the Dardanelles strait, according to the report carried by Interfax, a privately owned agency known for its independent contacts within Russia’s armed forces.

Three Russian war ships were seen sailing through the Bosporus in Istanbul, Turkey, on Thursday. It was not immediately clear if they were the same three vessels, although that seemed likely.

Interfax reported that another landing ship had left the Black Sea port of Sevastopol on Friday morning and was to pick up a “special cargo” in Novorossiysk before sailing toward the eastern Mediterranean. The state RIA Novosti news agency also said that the landing ship Nikolai Filchenkov would be headed toward Syria after picking up cargo in Novorossiysk, which it said would take several days.

The three ships reported to have passed through the Dardanelles are the Novocherkassk and Minsk landing vessels and Priazovye reconnaissance ship.

The Defense Ministry said it was unable immediately to confirm the ships’ departure.

The Foreign Ministry issued a statement Friday, warning the U.S. and its allies against striking any chemical weapons storage facilities in Syria.

“That would create the threat of releasing highly toxic chemical agents, with corresponding consequences for the civilian population and the environment,” the statement said. “Moreover, it can’t be excluded that as a result of such a reckless action militants or terrorists could gain access to chemical weapons. This is a step toward proliferation of chemical weapons not only across Syrian territory but beyond its borders.”