In addition to Hale new envoys from Poland, Wojciech Bozek, and the Netherlands , Hester Somsen submitted their credentials on Friday.

Hale who replaced George J. Mitchell as Special Envoy for Middle East Peace in 2011 , served as the United States Ambassador to Jordan since 2005, Deputy Chief of Mission in Amman since July 2003 and as Chargé d’affaires since July 2004. Previously he served as Deputy Chief of Mission at the U.S. Embassy in Beirut, Lebanon, and Executive Assistant to the Secretary of State. 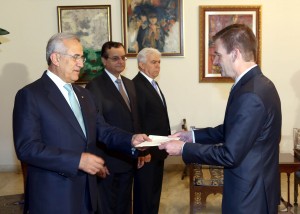 Hale served in Lebanon when David Michael Satterfield was the US ambassador (1998 – 2001) . He is considered one of the most prominent backers of the Lebanese constitutional institutions, according to Al Hayat newspaper