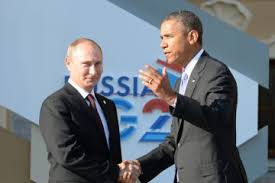 Russian President Vladimir Putin said he met with President Barack Obama on Friday morning in what was a “warm” and “constructive” conversation, but they still disagree on military intervention in Syria.

After a 20-minute discussion, Putin said the two leaders agreed to have their foreign ministers, Russian Foreign Minister Sergey Lavrov and Secretary of State John Kerry, discuss the issue with each other soon.

Putin said the G-20 leaders discussed the situation in Syria for the “entire evening” on Thursday night, until early in the morning Russian time, and the leaders were split. He reiterated the Russian position against military intervention, saying military force is only legitimate in self-defense or with a mandate of the United Nations, and the United States has neither justification.

“Those who act unilaterally violate the law,” Putin said.

Citing public opinion polling, a message from the Pope and the many countries at the G-20 that were against Syrian intervention, Putin said the majority worldwide was against intervention.

The United States has tried to address the crisis in Syria through the United Nations Security Council over the last few years, but Russia has blocked those efforts to a point that has forced the Obama administration to act, the U.S. ambassador to the U.N. said yesterday

“Russia continues to hold the council hostage and shirk its international responsibilities, including as a party to the Chemical Weapons Convention,” Samantha Power told reporters at the UN in New York. Her comments came after the U.S. Mission hosted briefings Thursday for U.N. member states on the U.S. assessments of the Aug. 21 chemical weapons attack that took place on the outskirts of Damascus.

The council, Power said, “is not protecting the stability of the region; it is not standing behind, now, an internationally accepted ban on the use of chemical weapons.” Instead, “the system has protected the prerogatives of Russia, the patron of a regime that would brazenly stage the world’s largest chemical weapons attack in a quarter-century, while chemical weapons inspectors sent by the United Nations were just across town.”

Power said it has always been the United States’ preference to see action on Syria come through the U.N., but that after trying to work through the international body for the past two-and-a-half years, Russia’s position means the Obama administration has no choice but to take action on its own.

>Power also repeated an argument made by the president on Wednesday, that the “red line” he first spoke of more than a year ago is one that the international community established. “The use of chemical weapons is not America’s red line. As President Obama said yesterday, this is the world’s red line,” she said.