Senate panel backs use of force against Syria 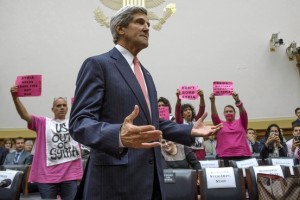 The revised options under development, which reflect Pentagon concerns that Syrian President Bashar al-Assad has dispersed his military equipment, include the use of Air Force bombers to supplement the four Navy destroyers armed with missiles that are deployed in the eastern Mediterranean. Initially, Pentagon planners said they didn’t intend to use aircraft in the proposed strikes.

The Pentagon shift came amid an accelerating tempo toward U.S. military action in response to the Assad regime’s alleged use of chemical weapons on a large scale Aug. 21, an attack U.S. officials say killed more than 1,400 people, including hundreds of children.

The Senate Foreign Relations Committee passed a resolution Wednesday saying a goal of U.S. policy will be to “change the momentum on the battlefield” in Syria’s civil war and speed a negotiated removal of Mr. Assad. The measure would ban the use of ground forces in Syria “for the purpose of combat operations” and sets a 60-day limit for Mr. Obama to launch strikes. It includes a possible 30-day extension if Mr. Obama determined that was needed to meet the resolution’s goals.

The Senate Foreign Relations Committee passed a resolution Wednesday saying a goal of U.S. policy will be to “change the momentum on the battlefield” in Syria’s civil war and speed a negotiated removal of Mr. Assad. The measure would ban the use of ground forces in Syria “for the purpose of combat operations” and sets a 60-day limit for Mr. Obama to launch strikes. It includes a possible 30-day extension if Mr. Obama determined that was needed to meet the resolution’s goals.

The committee vote was the first formal test of congressional sentiment about launching the Syria strike and illustrated how much Mr. Obama’s path to victory takes him across a political tightrope. Mr. Obama and his allies will have to balance anxieties of lawmakers who worry the U.S. will get too involved in Syria with the concerns of hawks worried that isolated attacks won’t accomplish enough. Beefing up the extent of any bombing mission could inflame these tensions.

The measure passed only after the committee added amendments by Sen. John McCain (R., Ariz.) designed to set a broader strategy. Mr. McCain has been a crucial supporter of Mr. Obama’s push for congressional approval to use force and opposed an earlier measure as too narrow. The amendment, co-sponsored by Sen. Chris Coons (D., Del.) also called for an increase in U.S. efforts to provide lethal and nonlethal support for “vetted” elements of the Syrian rebel opposition.

On Wednesday, administration officials spent a second day exhorting lawmakers to approve the resolution, arguing that while the strike is aimed specifically at the government’s use of chemical weapons, it also would degrade Mr. Assad’s overall military strength—suggesting a broader purpose.

“Is there a downstream collateral benefit to what will happen in terms of the enforcement of the chemical weapons effort? The answer is yes, it will degrade his military capacity,” Secretary of State John Kerry told the House Foreign Affairs Committee.

Taking out Mr. Assad’s helicopters, for example, would have a significant impact. The regime uses them to transport troops and supplies. Without them, Mr. Assad would have to rely more heavily on ground convoys, which are easier to attack.

Getting Away From Syria

More than two million people have fled the recent fighting in Syria, and the number of refugees is expected to reach 3.5 million by year-end, U.N. officials said Tuesday.

The White House declined to comment on the possible use of bombers or any other targeting changes. A senior administration official said the scope of targets never had been limited to Syria’s chemical weapons.

The Pentagon’s new planning stems from Mr. Assad moving equipment, including Russian-made helicopters, to bases around the country while the U.S. debates, a change that could require the Pentagon to use many more Tomahawk cruise missiles and other types of munitions than initially envisioned.

Moreover, U.S. officials say, Mr. Assad has moved aircraft and other equipment into hardened bunkers and shelters. In some cases, destroying these hardened targets, officials say, could require the use of multiple Tomahawks.

The Navy destroyers in the Mediterranean carry about 40 Tomahawks each. Air Force bombers could carry dozens more munitions, potentially allowing the U.S. to carry out follow-on strikes if the first wave doesn’t destroy the targets.

Like Mr. Assad, the Pentagon is trying to take advantage of the extra time before a U.S. strike. A senior U.S. official said that Mr. Assad’s movement of equipment has helped the Pentagon identify additional targets at previously unknown locations.

“Could the delay remove a target? Yes. But it is also creating targets. We are finding things we didn’t know existed,” said the senior official, who declined to specify the types of targets.

In testimony before Congress, officials have said they intend to “degrade” Mr. Assad’s ability to deliver chemical weapons. That could include Syria’s aircraft and mobile-launch systems.

President Obama said “the world set a red line” on Syria when it outlawed the use of chemical weapons. Colleen McCain Nelson reports on Lunch Break. Photo: Getty Images.

Over the weekend, the message from administration officials in closed-door briefings with lawmakers was the strikes would directly target Mr. Assad’s chemical-weapons capabilities and be “distinctly separate from the war on the ground,” referring to the Syrian civil war, according to a congressional aide who attended the briefings.

Since then, Messrs. Obama and Kerry have told lawmakers privately the goal would be to “change the momentum” more broadly, according to Mr. McCain and other lawmakers who have been briefed.

Administration officials wouldn’t say whether a “change of momentum” meant a wider set of targets could be hit with no connection to Mr. Assad’s chemical-weapons capabilities. But a U.S. official said targets could include government buildings such as the Defense Ministry. Previously, officials said the targets would include command-and-control sites, artillery batteries and intelligence facilities.

Mr. Obama, on a trip to Sweden before traveling to an international summit in Russia, said Wednesday the U.S. would be strengthened by congressional support for the attack, but reserved the right to act even if the resolution fails.

A senior administration official said Mr. Obama will formally make his case to Congress and Americans when lawmakers return to Washington next week after a break.

Photo: US Secretary of State Kerry is confronted by members of the antiwar group Code Pink as he arrives to address the House Foreign Affairs Committee.