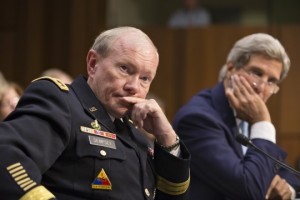 The Obama administration should launch an “intensive set of strikes” in Syria in order to set a clear signal to the Iranians that the United States is serious about preventing it from obtaining a nuclear weapon, a group of former Obama administration and State Department officials said on Wednesday.

The veteran diplomats argued that the Obama administration is losing credibility across the world and sending a sign that it is not serious about stopping Iran from building a nuclear weapon.

“If there isn’t a response the Iranians will draw the lesson that if we create red lines, we don’t mean them,” Dennis Ross, a former Obama administration national security adviser and veteran Middle East policy hand, said during a policy discussion hosted by the Jewish Institute for National Security Affairs (JINSA).

Obama must strike Syria whether or not Congress signs off on military action, argued Ross and the other former officials, including former Under Secretary of Defense for Policy Eric Edelman, former Assistant Secretary of State Stephen Rademaker, and John Hannah, national security adviser to former Vice President Dick Cheney.

If Obama fails to strike, he will have sent the message that “not only do we not have a red line, but the Congress would be sending a green light to anyone to use chemical weapons and know there won’t be a response from the U.S.,” Ross said.

If Obama fails to strike, he will have sent the message that “not only do we not have a red line, but the Congress would be sending a green light to anyone to use chemical weapons and know there won’t be a response from the U.S.,” Dennis Ross, a former Obama administration national security adviser and veteran Middle East policy hand said.

The former officials’ comments came as Secretary of State John Kerry and other top Obama administration officials appeared before the House Foreign Affairs Committee to argue for limited strikes in Syria.

If Obama fails to take action, “the Iranians will draw a conclusion” that America is “not prepared to act on the red line” regarding nuclear arms, Ross said. “There’s a direct relationship between what’s going on in Syria and how the Iranians would perceive it.”

Obama is no longer in a position to launch a limited strike on Syria, Ross added.

Obama’s uncertainty about Syria created confusion among the American public and has largely led Congress to come out against a military strike, said former Cheney adviser Hannah.

“The president was basically awful at preparing the American public about what he’s about to get us involved in in Syria,” Hannah said. “They have not heard from their Commander in Chief about this issue and what Syria means.”

“He’s going to have to do a lot more about that on Iran and get serious about congressional consultations at least,” Hannah said, explaining that it would be dangerous if the decision regarding a strike on Iran got stuck in bureaucratic limbo.

“President Obama breaks off his golf vacation to round up his posse and [British Prime Minister] David Cameron backs out,” Rademaker said. “Then he decides, ‘Alright what I actually need is congressional authorization.’

“It doesn’t suggest a high level of confidence in his conviction that he’s doing the right thing,” Rademaker said. “That’s fed some of the skepticism in Congress.”

The former officials had gathered under the JINSA umbrella to release a new report that lays out strategies to prevent a nuclear Iran.

The report states that Obama has not adequately conveyed that he is serious about striking Iran should it fail to comply with international demands regarding its nuclear program.

“We believe that the Iranian leadership, right now, perceives such will [to strike] to be absent,” the report states.

That is why Syria is so critical, Ross said.

“The Iranian leadership [must] understand the consequences of diplomacy failing is that force will be used,” Ross said. “I do think the more credible it is –that we will be prepared to use force– then it is much more likely to make a diplomatic outcome a certainty.”