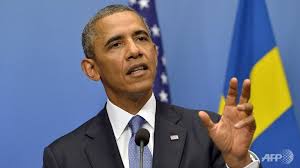 President Barack Obama took his case for military action in Syria to the international community as he headed to a summit of world leaders hosted by Russia, the Syrian regime’s ardent Western ally.

Mr. Obama, on a stopover in Stockholm on Wednesday, turned around criticism that responding to the Syrian government’s alleged use of chemical weapons was a personal matter, saying it was a global issue.

Most potential allies, however, have said it is up to the United Nations Security Council to mandate action, an endorsement that permanent member Russia has blocked.

The one ally that Mr. Obama could count on for public and military support, French President François Hollande, was thrown into uncomfortable diplomatic and political terrain when Mr. Obama made the unexpected decision on Saturday to put the issue of military action to Congress.

In extraordinary parliamentary sessions on Wednesday called to discuss the Syrian crisis in both houses of the French Parliament, opposition leaders lashed out at Mr. Hollande for considering using force without having exhausted all diplomatic avenues.

The French president has the authority to engage forces overseas without seeking prior parliamentary approval. His only constitutional duty is to inform lawmakers within three days after the start of military action.

But many French lawmakers pressed Mr. Hollande to seek their support, and Foreign Minister Laurent Fabius said on Wednesday that although a vote wasn’t necessary, the government hadn’t ruled it out. The U.K. already withdrew as a potential ally last week when the British Parliament voted against action.

Mr. Obama said on Wednesday that he could order strikes against Syria even if Congress doesn’t authorize them, but that “we will be stronger as a country in our response if the president and Congress does it together.”

Mr. Obama was speaking during a news conference in Sweden before heading on to a G-20 meeting in St. Petersburg, Russia, this week. He had been scheduled to meet with Russian President Vladimir Putin ahead of the summit, but that visit was canceled as divisions over Syria hardened and Russia refused to hand over National Security Agency leaker Edward Snowden.

Mr. Obama underscored his frustration with Mr. Putin’s support for Syrian President Bashar al-Assad’s regime, saying that it has been difficult to convince Russia to acknowledge what the U.S. says is the behavior of the Syrian leader.

Mr. Obama said he hadn’t written off the possibility that the U.S. and Russia could work together on areas of common interest. “Do I hold out hope that Mr. Putin may change his position on some of these issues?” Mr. Obama said. “I’m always hopeful, and I will continue to engage him.”

Mr. Putin, in his own comments on Wednesday, said he hoped for the chance to talk with Mr. Obama despite the White House’s decision to cancel their meeting in Moscow.

“I think it’d be best not to get annoyed but to be patient and work to find solutions,” Mr. Putin told the Associated Press.