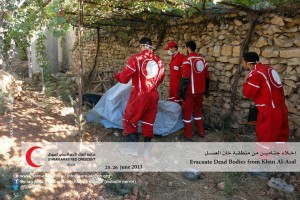 The Russian Foreign Ministry claimed on Wednesday that probes from Khan al-Assal show chemicals used in the March 19 attack did not belong to standard Syrian army ammunition, and that the shell carrying the substance was similar to those made by a rebel fighter group, according to a report by RT, a Russian-based television network which is funded by the government.

According to the report the samples taken at the site of the March 19 attack were analyzed by Russian experts and indicated that a projectile carrying the deadly nerve agent sarin was most likely fired at Khan al-Assal by the rebels, the ministry statement suggests.

The main issue the UN experts addressed was the Aug 21 chemical attack which resulted in the killing of over 1400 people.

Russia is Syria’s main ally . Ever since the uprising against the regime erupted in March 2011 Russia has been Syria’s key defender at the UN and its key arms supplier. Russia vetoed several UN security Council resolutions that called for peaceful settlement of the Syrian crisis.