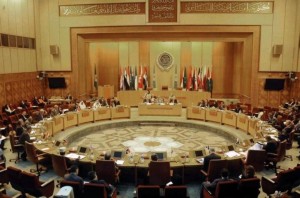 The Arab League has discussed the ongoing crisis in Syria at a closed-door meeting in Cairo.

Ambassador level talks will be followed with the foreign ministers meeting due to start at 16:00 GMT.

The meeting in the Egyptian capital had been scheduled for Tuesday, but was advanced to Sunday “in light of rapid developments in the Syria situation and based on the request of several Arab states”, Ahmed Ben Helli, Arab League deputy chief, said on Saturday.

Al Jazeera’s Nadim Baba, reporting from Cairo, said that Ahmed Aljarba, the head of the Syrian National Council (SNC), would give a speech at the foreign ministers meeting

The head of the opposition umbrella group backed by the West and Arab states is expected to ask Arab foreign ministers to back military intervention in Syria.

The Arab League on Tuesday accused the Syrian government of carrying out a chemical-weapons attacks in a suburb of Damascus that killed hundreds of people, including children, on August 21.

Permanent representatives condemned what they called the “horrible crime carried out with internationally prohibited chemical weapons”, and put the “entire responsibility” on President Bashar al-Assad’s government.

The Arab League suspended Syria’s membership in 2011 after Assad’s government failed to abide by an Arab peace plan that aimed to end the conflict.

The 22-member organisation offered in March Syria’s seat to the SNC and decided to let its member nations arm the rebels battling Assad’s government.

John Kerry, the US secretary of state, named the regional body on Friday among a list of allies “ready to respond” to the alleged chemical-weapons attack.

However, some influential Arab League members, including Egypt, Iraq, Lebanon, Tunisia and Algeria, have expressed opposition to foreign military intervention in Syria.

Al Jazeera’s Cairo correspondent Nadim Baba said that it would be disappointment for the US, if Arab League does not give a unified green light to military intervention in Syria.

Some of the Gulf Arab countries, notably Qatar and the UAE, took part in the military operations in Libya that led to the removal of the longttime Libyan leader Muammar Gaddafi from power and his eventual death in 2011.