Pope Francis to bishops: Get out of your churches 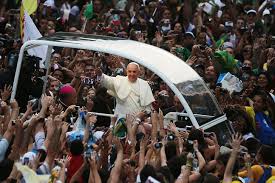 RIO DE JANEIRO — Pope Francis told a gathering of Catholic bishops in the cathedral of this Brazilian city on Saturday to get out of their cathedrals and spread the gospel and serve those most in need.

It was yet another admonishment from the first Latin American pontiff — who has called for a Church focused on the poor — for Catholics to adopt a more missionary mind-set.

“We cannot keep ourselves shut up in parishes, in our communities, when so many people are waiting for the Gospel,” Francis said.

“Let us courageously look to pastoral needs, beginning on the periphery (of where we live), with those who are farthest away, with those who do not usually go to church. They, too, are invited to the table of the Lord.”

Other events for the pope Saturday include a meeting with intellectuals and political and business leaders. He planned to participate in an evening vigil with young people on Copacabana Beach and celebrate Mass there Sunday — his final day in Brazil.

On Friday night, Francis issued an impassioned plea for the downtrodden and oppressed while addressing throngs of young Catholics on Copacabana Beach for a re-enactment of Christ going to his crucifixion.

“On the cross,” Francis said to a crowd estimated at more than 1 million, “Jesus unites himself to the silence of the victims of violence,” along with those suffering drug addiction, discrimination and religious persecution, and “every person who suffers from hunger in a world where tons of food are thrown out each day.”

The re-enactment is a tradition of World Youth Day, which convenes young Catholics every two years for an encounter with the pope. It has brought more than 300,000 self-styled “pilgrims” to Rio this year.

The event marks Francis’ first foreign trip since his March election and has featured strong statements on issues he considers important to his pontificate, such as solidarity with the poor and even a condemnation of drug dealers as “merchants of death” and a rebuke of proposals to liberalize drug laws.

Participants in World Youth Day seemed awed by the experience of seeing the father in the flesh — even if it meant braving stormy skies and unseasonably cold conditions in Rio.

A deluge of rain all week forced organizers to change plans for a final Mass on Sunday, which was to take place on a makeshift site set on a recovered mangrove that had been reduced to a muddy mess. The Mass will instead be celebrated at Copacabana Beach.