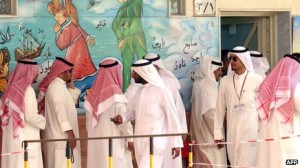 Voters in Kuwait are casting their ballots in the second parliamentary election in less than a year.

The vote was triggered by a ruling from the constitutional court that dissolved the previous parliament, elected in December, over a procedural flaw.

The vote is being boycotted by some opposition groups.

Kuwait has one of the most empowered parliaments in the Gulf region, but constant political tension has crippled its work.

The law allowed each voter to choose just one candidate at the ballot box, down from four previously.

Opponents said the new rules were designed to weaken the opposition, and that changes to the voting system should be agreed by parliament.

However, some opposition candidates are participating in Saturday’s vote.

Kuwait’s parliament has lawmaking powers and can hold government ministers to account.

However, the emir has the final say in matters of state. He also chooses the prime minister, who in turn picks a cabinet, with members of the ruling al-Sabah family occupying the top posts.

Continuous paralysis in the country and six elections in the space of seven years have dented Kuwaitis’ enthusiasm for the elections, the BBC’s Carine Torbey reports from Kuwait City.

The scorching heat and the long hours of fasting during the Islamic holy month of Ramadan might also discourage voters from taking to the polls, our correspondent says.

Kuwait still prides itself on its more representative system but there is a growing concern that it is increasingly becoming dysfunctional, she adds.

Many say the political crises have prevented action on a growing number of challenges facing in the country, including sluggish infrastructure development and slow economic reforms.