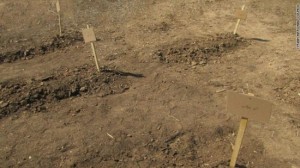 Syrian National Coalition, which is the main Syrian opposition group claimed on Tuesday that it has discovered a number of mass graves containing the bodies of hundreds of Hezbollah fighters that were killed in Syria.

“We have discovered a number of mass graves which Hezbollah used to bury its members after every battle on Syrian territory, instead of repatriating the bodies to Lebanon,” SNC spokesman Mouayyed Ghizlan told CNN Arabic program.

“For Hezbollah, these cemeteries have two objectives: the first is to avoid shocking the dead’s families which could lead to a strong outcry by the Lebanese public opinion, and the second is hiding the real number of casualties and preventing the Syrian fighters and rebels from knowing the real figures,” Ghizlan added.

CNN reportedly tried several times to contact Hezbollah but was unable to reach any official to comment about the discovery .

Hezbollah has been sending its fighters to battle alongside the Syrian regime against rebels seeking the overthrow President Bashar Assad.

Kuwaiti Newspaper Al Seyasseh reported today that the Hezbollah militant group has opened training camps in the barren mountains of the ancient city of Baalbek to receive hundreds of young Shiite volunteers from Iraq, Yemen, Syria and Lebanon for training them to fight alongside the Syrian regime forces against the mostly Sunni rebels.

According to a video report by the Free Syrian Army HezbollahThe Kuwaiti newspaper’s sources quoted Western intelligence as saying that “these camps currently contains about a thousand trainees who are being provided intensive training courses by Hezbollah experts, Iranian Revolutionary Guards officers and officers of the Syrian army .

The daily added that this is all part of a program aimed at training 20 thousand fighters over the next few months who will be transferred to the fronts in Syria.

While Hezbollah and the Iranians are focusing on training the volunteers on using Iranian made weapons the Syrian army officers are focusing on explaining the geographic areas where the fighters will be sent in addition to some of the tactics of the Syrian military , according to the report

This report comes hours after the EU foreign ministers agreed to list the military wing of Hezbollah as a terrorist organisation. Hezbollah’s involvement in the war across the border in Syria, in support of President Bashar al-Assad reportedly hardened European opinion with regards to the Shiite militant group.