Detroit goes bankrupt, largest US city ever to do so 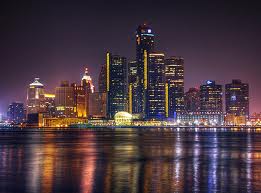 Detroit, the cradle of America’s automobile industry and once the nation’s fourth-most-populous city, has filed for bankruptcy, an official said Thursday afternoon, the largest American city ever to take such a course.

The decision to turn to the federal courts, which required approval from both the emergency manager assigned to oversee the troubled city and from Gov. Rick Snyder, is also the largest municipal bankruptcy filing in American history in terms of debt.

Not everyone agrees how much Detroit owes, but Kevyn D. Orr, the emergency manager who was appointed by Mr. Snyder to resolve the city’s financial problems, has said the debt is likely to be $18 billion and perhaps as much as $20 billion.

For Detroit, the filing comes as a painful reminder of a city’s rise and fall.

Founded more than 300 years ago, the city expanded at a stunning rate in the first half of the 20th century with the arrival of the automobile industry, and then shrank away in recent decades at a similarly remarkable pace. A city of 1.8 million in 1950, it is now home to 700,000 people, as well as to tens of thousands of abandoned buildings, vacant lots and unlit streets.

From here, there is no road map for Detroit’s recovery, not least of all because municipal bankruptcies are rare. Some bankruptcy experts and city leaders bemoaned the likely fallout from the filing, including the stigma it would carry. They anticipate further benefit cuts for city workers and retirees, more reductions in services for residents, and a detrimental effect on future borrowing.

But others, including some Detroit business leaders who have seen a rise in private investment downtown despite the city’s larger struggles, said bankruptcy seemed the only choice left — and one that might finally lead to a desperately needed overhaul of city services and a plan to pay off some reduced version of the overwhelming debts. In short, a new start.

The decision to go to court signaled a breakdown after weeks of tense negotiations, in which Mr. Orr had been trying to persuade creditors to accept pennies on the dollar and unions to accept cuts in benefits.

All along, the state’s involvement — including Mr. Snyder’s decision to send in an emergency manager — has carried racial implications, setting off a wave of concerns for some in Detroit that the mostly-white, Republican-led state government was trying to seize control of Detroit, a Democratic-held city where more than 80 percent of residents are black.

The nature of Detroit’s situation ensures that it will be watched intensely by the municipal bond market, by public sector unions, and by leaders of other financially challenged cities around the country. Only slightly more than 60 cities, towns, villages and counties have filed under Chapter 9, the court proceeding used by municipalities, since the mid-1950s.

The debt in Detroit dwarfs that of Jefferson County, Ala., which had been the nation’s largest municipal bankruptcy, having filed in 2011 with about $4 billion in debt. The population of Detroit, the largest city in Michigan, is more than twice that of Stockton, Calif., which filed for bankruptcy in 2012 and had been the nation’s most populous city to do so.

Other major cities, including New York and Cleveland in the 1970s and Philadelphia two decades later, have teetered near the edge of financial ruin, but ultimately found solutions other than federal court. Detroit’s struggle, experts say, is particularly dire because it is not limited to a single event or one failed financial deal, like the troubled sewer system largely responsible for Jefferson County’s downfall.

Instead, numerous factors over many years have brought Detroit to this point, including a shrunken tax base but still a huge, 139-square-mile city to maintain; overwhelming health care and pension costs; repeated efforts to manage mounting debts with still more borrowing; annual deficits in the city’s operating budget since 2008; and city services crippled by aged computer systems, poor record-keeping and widespread dysfunction.

All of that makes bankruptcy — a process that could take months, if not years, and is itself expected to be costly — particularly complex.

“It’s not enough to say, let’s reduce debt,” said James E. Spiotto, an expert in municipal bankruptcy at the law firm of Chapman and Cutler in Chicago. “At the end of the day, you need a real recovery plan. Otherwise you’re just going to repeat the whole thing over again.”

Leaders of public sector unions and municipal retirees around the nation will be focused on whether Detroit is permitted to slash pension benefits, despite a provision in the State Constitution that union leaders say bars such cuts.

Officials in other financially troubled cities may feel encouraged to follow Detroit’s path, some experts say. A rush of municipal bankruptcies appears unlikely, though, and leaders of other cities will want to see how this case turns out, particularly when it comes to pension and retiree health care costs, said Karol K. Denniston, a bankruptcy lawyer with Schiff Hardin who is advising a taxpayer group that came together in Stockton after its bankruptcy.

“If you end up with precedent that allows the restructuring of retirement benefits in bankruptcy court, that will make it an attractive option for cities,” Ms. Denniston said. “Detroit is going to be a huge test kitchen.”

Around this city, there was widespread uncertainty about what bankruptcy might really mean, now and in the long term, though leaders of other cities who have been through court cautioned of lingering effects.

“The label sticks with us, unfortunately,” said Daniel E. Keen, the city manager of Vallejo, Calif., which filed for bankruptcy in 2008.

For some Detroiters, recent memories of bankruptcies by Chrysler and General Motors — and the re-emergence of those companies — appeared to have calmed nerves. But experts say corporate bankruptcy procedures are significantly different from municipal bankruptcies.

Here, residents are likely to see little immediate change from the way the city has been run since March, when Mr. Orr arrived to oversee major decisions. A bankruptcy lawyer, he is widely expected to continue to run Detroit during a legal process. Mayor Dave Bing and Detroit’s elected City Council are still paid to hold office and are permitted to make decisions about day-to-day operations, though Mr. Orr could remove those powers at any point.

Mr. Orr has said that as part of any restructuring he wants to spend about $1.25 billion on improving city infrastructure and services. But a major concern for Detroit residents remains the possibility that services, already severely lacking, might be further diminished in bankruptcy.

In 2012, Detroit had the highest rate of violent crime in the nation for a city larger than 200,000, a report from Mr. Orr’s office showed. About 40 percent of the city’s streetlights do not work. More than half of Detroit’s parks have closed since 2008.