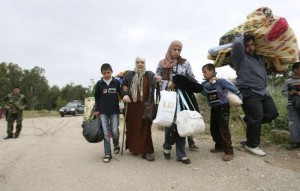 A majority of Lebanese believe the influx of Syrian refugees in their country threatens national security, Norway’s Fafo research foundation said in a report obtained on Thursday by AFP.

In the survey carried out by Fafo in late May, 900 people were interviewed across Lebanon, a country of more than four million people which now hosts around 600,000 Syrian refugees.

The findings showed that “52 percent of the respondents believe that the Syrian refugees are posing a threat to national security and stability,” the survey said.

Fifty-four percent said Lebanon “should not receive more refugees” while 82 percent said refugees are taking jobs from the Lebanese and causing wages to fall.

About half of those interviewed said the Syrians were “supported financially to an unfair degree”.

Many Lebanese also said they cannot trust the Syrian people, with 61 percent saying they are “not comfortable” having Syrians as close neighbours.

Sixty-seven percent — or two in three polled — said they are “uncomfortable sharing a meal with Syrians” and 82 percent said they would not be happy if a family member married a Syrian.

More than 90 percent of those surveyed said that the Syrian conflict “has had a negative impact on the Lebanese government’s capacity to protect Lebanese citizens and govern”.

The conflict that erupted in Syria in March 2011 has spilled over the border into Lebanon where supporters and opponents of the Damascus regime have clashed frequently.

The United Nations says there are about 600,000 Syrian refugees registered in Lebanon, although other independent estimates say the number could be closer to one million.

Two-thirds of those polled said the UN should open camps in Lebanon for Syrian refugees as it did in Jordan and Turkey.

On Wednesday, Lebanon’s ambassador to the UN, Nawaf Salam, vowed his country will keep its borders open to refugees from Syria but said the government may have to consider opening camps.

“Lebanon will not close its borders. Lebanon will not turn back any refugee,” Salam said, adding however that Beirut “needs concrete international help to cope with this growing problem”.