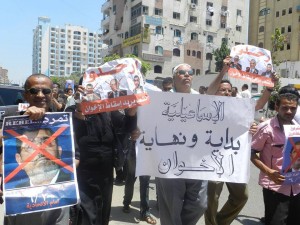 Egypt’s new rulers gave new credence to a court case against the ousted president, Mohamed Morsi, and members of the Muslim Brotherhood on Thursday over their escape from prison during the uprising that toppled his predecessor, Hosni Mubarak.

The case was transferred from an appeals court to the State Security prosecutor for further investigation. No charges have yet been filed. Its acceptance by powerful prosecutors follows the arrest of many Muslim Brotherhood members and is a new blow to the group by the military-backed government.

The detentions have been criticized by rights groups and the Obama administration, which spent Thursday walking back remarks made early in the day by a State Department spokeswoman, Jen Psaki, seeming to criticize Mr. Morsi as undemocratic and in so doing seeming to validate the military’s move to oust him.

Reuters reported that Ms. Psaki’s counterpart at Egypt’s Foreign Ministry, Badr Abdelatty, interpreted her remarks as a welcome signal that the United States understood “the political developments that Egypt is witnessing in recent days as embodying the will of the millions of Egyptians who took to the streets starting on June 30 to ask for their legitimate rights and call for early elections.”

The Muslim Brotherhood denounced her remarks as hypocritical and further proof of what it has called American endorsement of the military takeover in Egypt.

At her regular State Department briefing on Thursday, asked about the reactions, Ms. Psaki said she had been “referring to all of the voices that have been — we have heard coming — the millions, I should say, coming from Egypt, and how strongly they have voiced their views about his rule.” She added, “But beyond that is up for the Egyptian people to determine.”

The renewed investigation of Mr. Morsi and members of the Muslim Brotherhood dates to the uprising that led to the ouster of Mr. Mubarak in 2011. Mr. Morsi and other Brotherhood leaders were arrested on Jan. 28, and held in the Wadi Natroun prison north of Cairo, until they escaped two days later.

In a telephone call to Al Jazeera television immediately after the escape, Mr. Morsi said that he was among more than 30 Brotherhood members, including 6 other members of its Guidance Bureau, who had been broken out of their cells by people they did not know. Some appeared to be other inmates, while others were dressed like civilians, Mr. Morsi said.

“More than a hundred people made every effort to open up the prison for more than four hours,” Mr. Morsi said. Once out of their cells, they found that “the courtyard was empty, and we only saw the group that for a long time had been trying to break the door.”

The group included a top Brotherhood official, Essam el-Erian, and Saad el-Katatni, who later led the group’s political party and became the speaker of Parliament.

Mr. Morsi has not been seen publicly since his ouster on July 3. It is unclear where he is being held, or whether he and the others will face the charges in court.

His ouster and the subsequent suppression of the Brotherhood have enraged the group’s members and led to a spate of scapegoating attacks by Muslim extremists against Christians they accuse of supporting his fall, rights activists said.

While tensions between the Christian minority and extremist elements in the Muslim majority are not new, attacks have been reported across the country — in the northern Sinai Peninsula, in a resort town on the Mediterranean Coast, in Port Said along the Suez Canal and in isolated villages in upper Egypt.

A priest has been shot dead in the street, Islamists have painted black X’s on Christian shops to mark them for arson and mobs have attacked churches and besieged Christians in their homes. Four Christians were reported killed with knives and machetes in one village last week.

Islamist electoral victories after the revolution that ousted Mr. Mubarak alarmed Christians, and many participated in the protests against Mr. Morsi. But they by no means were a majority of the millions who joined the rallies that preceded his fall.

But that did not stop extremists from blaming Christians for the change in government.

“They thought Christians played a big role in the protests and in the army’s intervention to topple Morsi, so this is revenge for that,” said Ishaq Ibrahim, who has documented the violence for the Cairo-based Egyptian Initiative for Personal Rights.

In some places, Christians were warned not to participate in the anti-Morsi protests.

Fliers distributed in the upper Egypt province of Minya, documented by the rights group, said that “one liter of gas can light up your gold, wood, plumbing, tractor and carpentry shops, buses, cars, gardens and maybe houses, churches, schools, agricultural fields and workshops.”

They were signed “people who care for the country.”

After Mr. Morsi’s ouster, Islamist mobs in the village of Dagala looted one church, burned a building belonging to another and surrounded Christian homes, shattering their windows with rocks and clubs, the group said.

After one Christian man shot at the attackers from his roof, they dragged his wife from the house and shot her. She is in a hospital.

“The police came the day after the events, and they didn’t do anything,” Mr. Ibrahim said. “People prevented the fire engines from coming in so they couldn’t do anything.”

In the village of Naga Hassan near Luxor, Muslim mobs invaded Christian homes and set them on fire. Security forces arrived to evacuate the women, but left the men, four of whom were subsequently stabbed and beaten to death, Mr. Ibrahim said.

One of the men, Emile Nessim, was a local organizer for tamarrod, the “rebellion” petition campaign that collected signatures and called for the anti-Morsi protests.

Photo: Egyptian Protesters march from Ismailia court to the governorate building celebrating the court’s verdict. The misdemeanour court in Ismailia decided on on June 23, 2013 to refer the Wadi Natroun prison case to the public prosecution to investigate new facts added to the case. Hamas’ Qassam Brigades and Lebanon’s Hezbollah have been accused of conspiring with elements of Jihadist Salafis and the Muslim Brotherhood to storm the prison and release its detainees. Hezbollah terror cell leader Sami Shihab was among those that escaped.