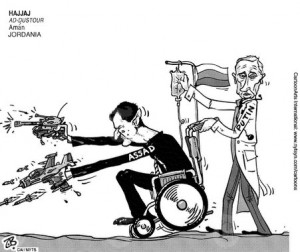 UNITED NATIONS — The deeply divided U.N. Security Council failed to approve a statement calling on the Syrian government to allow immediate access to 2,500 civilians trapped in the besieged city of Homs, where pro-regime troops have launched a major offensive to rebels from the opposition stronghold.

Russia, Syria’s closest ally, and Western nations, which support the opposition, were again at odds — as they have been since the Syrian conflict began over two years ago.

Austria and Luxembourg circulated a draft press statement earlier this week expressing “grave concern” at the plight of the trapped civilians and calling for Syria to allow “immediate, safe and unhindered access” to Homs for U.N. and other humanitarian workers so they could assist civilians in need, especially those requiring medical treatment.
Russia’s U.N. Mission said it proposed an alternative statement which called for immediate access to Homs as well as the predominantly Shiite government-controlled towns of Nubul and Zahra, which the opposition fighters are seeking to take.

U.N. diplomats said supporters of the original statement insisted on focusing on Homs, a strategic central city of about 1 million located on the road between the capital Damascus and regime strongholds on the Mediterranean coast, and refused to equate the scale of the attack there with fighting in the two small villages.

Russia rejected compromise language proposed by the original statement’s supporters which called for immediate access “to reach civilians in Homs and all areas of ongoing hostilities,” the diplomats said, speaking on condition of anonymity because negotiations were private.

In an email to The Associated Press, Russia’s U.N. Mission expressed regret that its “factual proposals … have been completely ignored” and said the compromise text was “even more imbalanced” than the original and was “based on double standards.”

Russia said its proposal used language previously agreed by the Security Council and focused “on the most critical events of the current moment.”

It noted that the combined population of Nubul and Zahra was about 40,000 before the crisis started “and that these towns have been tightly besieged for a long time.”

It also pointed to a statement from Syria’s Foreign Ministry saying the government has requested the International Committee of the Red Cross and the Syrian Arab Red Crescent “to send a humanitarian convoy to the civilians trapped in the old city of Homs and held by terrorist groups there as a human shield,” adding that this was a usual opposition practice.

“The Syrian government has also requested that those civilians be evacuated through safe passages,” the mission said.

The United States and its European allies have proposed three Security Council resolutions aimed at pressuring Syrian President Bashar Assad to stop the violence, but all three have been vetoed by Russia and China, which also supports the Syrian government.

The initial draft statement on Homs is similar to a press statement approved by the council on June 7 urging Syria to immediately allow U.N. and other humanitarian groups into the strategic town of Qusair to provide aid to civilians who desperately needed food and medical care.

Diplomats said Russia held up approval of that statement until rebel fighters were routed from Qusair by government forces.