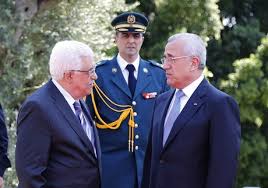 Palestinian President Mahmoud Abbas stressed on Thursday that Palestinians living in refugee camps in Lebanon are the guests of Lebanon and do not need arms because the Lebanese government and the people of Lebanon protect them.

“We are in no need of weapons because we are protected by the Lebanese government and people.”
“We are temporary guests in Lebanon and we hope that we may soon return to our homeland,” he added.

“We must abide by Lebanon’s laws as long as we are its guests,” Abbas stressed.

He added : “The Palestinian Authority does not meddle in the affairs of Arab countries, including those of Lebanon.”

He made his comments after holding talks at the Grand Serail with caretaker Prime Minister Najib Miqati.

“We are open to whatever Lebanese decision is taken to control the arms in the Palestinian refugee camps,” Abbas stressed.

Mikati hailed Abbas’ position and said he is hoping that the Palestinians would respect the Palestinian Authority’s decision that they refrain from interfering in Lebanese internal affairs.

Following his meetig with Mikati, Abbas headed to Ain el-Tineh where he held talks with Speaker Nabih Berri.

He reiterated after the meeting his respect for the all decisions taken by official Lebanese authorities over the Palestinian refugees.

“In Lebanon, we are most concerned with the country’s stability and security,” Abbas said .

The Palestinian president arrived in Lebanon on Wednesday on a three-day visit where he is set to meet with a number of senior officials.

His first meeting was with President Michel Suleiman at the Baabda Palace.