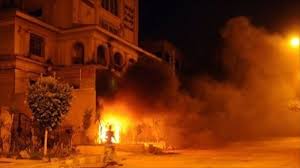 Four people were killed and 45 were injured in the siege on the headquarters, according to Egypt’s Ministry of Health as quoted in the state news agency. In total, the death toll from Sunday’s protests rose to more than a dozen.

Video of the attacks showed young men looting furniture and office supplies from the building, which later in the day appeared largely empty with windows broken.

The scale of Sunday’s marches, which appeared to be some of the largest in Egypt’s history, continue a political gridlock that has brought Egypt’s government to a standstill.

The Tamarod, or “rebel” group that led a petition campaign demanding Mr. Morsi’s resignation, offered Mr. Morsi an ultimatum Monday: either he steps down by 5 p.m. on Tuesday and “leaves power to Egyptian state institutions to prepare for early elections” or the group will “begin the call for civil disobedience.”

The statement offered few specifics of what exactly the call to civil disobedience would mean in practice, and it was unclear on Monday morning whether the other major opposition would join Tamarod’s call.

With the exception of the sacking of the Brotherhood headquarters and clashes in smaller cities throughout Egypt, Sunday’s main protests in Cairo remained largely peaceful. But the violent raid on the Brotherhood offices exposed the leaderless nature of the protests against Mr. Morsi. Opposition politicians and activists appeared to have little control over rioters who attacked the building.

For its part, the Muslim Brotherhood’s leadership made good on warnings that it would defend its offices if they came under attack. Videos of the nighttime attack showed unseen gunmen, presumably Brotherhood partisans, firing at attackers from the shadowy windows of the building. The videos couldn’t be independently verified.

The attack also reveals the Brotherhood’s increasing isolation: Police officers had already told local media weeks before that they wouldn’t protect the office of political parties from violent attacks. Indeed, some police officers were seen joining the protests against Mr. Morsi yesterday.