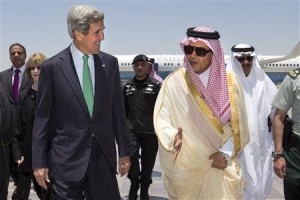 Saudi Arabia said on Tuesday theSyrian government’s attempts to suppress a rebellion amounted to “genocide” and called for rebels to get military aid to defend themselves, in a sharp escalation of rhetoric over the conflict.

The prince did not spell out what he meant by genocide but the kingdom has accused Assad of using air and artillery strikes against heavily populated civilian areas.

The Syrian war has also become increasingly sectarian, pitting the president, from an offshoot of Shi’ite Islam, against rebels mostly from the country’s Sunni Muslim majority.

The fighting has accentuated sectarian divisions across the region. Saudi Arabia and other Sunni states have already sent arms to the insurgents, while analysts and diplomats say Shi’ite power Iran, along with Russia, is among Assad’s main suppliers.

Prince Saud said the world’s top oil exporter “cannot be silent” at the recent decision by Lebanese Shi’ite militant group Hezbollah to send fighters into Syria to back Assad – the latest sign of how Syria’s neighbors are getting entangled.

“The most dangerous development is the foreign participation, represented by Hezbollah and other militias supported by the forces of the Iranian Revolutionary Guard,” the prince said, repeating a call for rebels to be armed.

“The kingdom calls for issuing an unequivocal international resolution to halt the provision of arms to the Syrian regime and states the illegitimacy of the regime,” he added.

Kerry has returned to the Middle East after a two-day visit to India and, his aides say, will continue efforts to strengthen the Syrian opposition and revive peace talks between Israel and the Palestinians.

U.S. President Barack Obama has said he will arm the rebels but has not disclosed what type of assistance he will provide.

Kerry is trying to ensure that the aid to the rebels is properly coordinated among the allies, in part out of concern that weapons could end up in the hands of extremist groups.

“Our goal is very clear, we cannot let this be a wider war. We cannot let this contribute to more bloodshed and prolongation of the agony of the people of Syria,” he said at the conference.

A meeting between Kerry and European and Arab counterparts in Doha last week agreed to increase support for Syria’s rebels although there was no consensus over providing arms, with Germany and Italy strongly opposed.

More than 93,000 people have been killed in the Syrian conflict, which began as a protest movement against Assad.