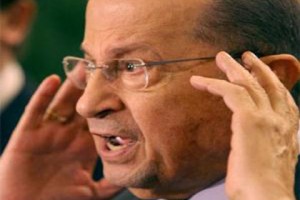 “The army’s sacrifice must not be the price for extending Army Commander Gen. Jean Kahwaji’s term especially since we are against extension in general and we do not want to manipulate the military institution’s law.” Aoun said after his weekly meeting of the Change and Reform bloc.

Aoun added: “We are the ones who should give our opinion regarding the army’s chief as per the appointments’ traditions and because we are the representatives of Christians in the ( outgoing caretaker) cabinet.”

Aoun denied accusing President Michel Suleiman of being a traitor for filing complaints with the Arab League and the United Nations Security Council over Syria’s attacks on Lebanese territories.

“We could say he was mistaken, but not a traitor,” Aoun stressed.

MTV reported last January that Aoun is opposed to Kahwaji’s term extension because he is eying the position of army chief for his son-in-law general Chamel Roukoz who is currently the commander of Lebanese Commando Regiment, also known as Maghaweer.