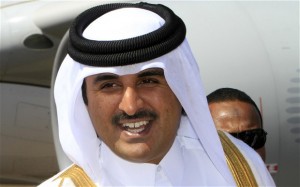 DOHA: The Emir of Qatar, Sheikh Hamad bin Khalifa al-Thani, is expected to meet members of the royal family Monday, with Qatari officials and diplomats saying a transfer of power to his son, Crown Prince Sheikh Tamim bin Hamad al-Thani, is imminent.

The sheikh “will meet Monday with the royal family and advisors,” the Qatar-based Al-Jazeera television news channel reported Sunday, stressing that the meeting would take place in the context of a possible succession.

Diplomats and Qatari officials agree that the emir is preparing to hand over control of the oil-rich emirate, which plays a key role in the Arab world.

The 61-year-old emir came to power in 1995 in a palace coup against his father . He has since helped build Qatar into a strong voice in the Gulf and on the world stage.

Sheikh Tamim, born in 1980, is the second son of the emir and his second wife Sheikha Mozah.

The crown prince is joint commander of the armed forces and head of the country’s Olympic committee.

“The emir is convinced that he should encourage the new generation. He plans to transfer power to the crown prince, Sheikh Tamim, and to carry out a ministerial reshuffle to bring a large number of young people into the cabinet,” a Qatari official told AFP on condition of anonymity.