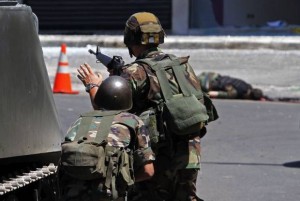 Lebanese army commandos seized Monday the Mosque complex belonging to Sheikh Ahmad Assir in the southern coastal city of Sidon, in the second day of clashes between the military and gunmen loyal to the militant preacher that have claimed the lives of at least 17 soldiers and more than 25 gunmen.

Army eavesdropping devices indicated that Assir was still in the vicinity of the complex, the sources said, adding that the fiery sheikh was heard as urging his gunmen not to surrender to the military and “fight to the death.”

The sources said despite having taken control of the complex, soldiers were still trading gunfire with snipers located on the rooftops of nearby buildings.

They said the military has also captured 30 members of Assir’s group.

Lebanon’s military prosecutor issued arrest warrants against Assir and 123 of his followers, a judicial source told The Daily Star. The warrants included the names of Assir’s brother and singer Fadl Shaker who gave up his singing career to follow the radical sheikh, they added.

The seizure of the complex at noon came after an attempt late Monday by a group of Salafi preachers to mediate a truce reached a dead end, with the Army determined to continue its operations until Assir was captured and his followers crushed, the sources said.

In overnight fighting, the Army had tightened the noose around Assir and his some 250 gunmen barricaded in the Abra complex, 40 km south of Beirut, the sources said.

Fighting erupted Sunday after armed supporters of Assir attacked a military checkpoint near the Abra complex, killing three soldiers and wounding several others.

Pitched battles ensued as the Army, which vowed to respond with an iron fist to the “cold-blooded” attack, stormed Assir-held Abra.

At least 14 more soldiers were killed and more than 65 wounded. At least two civilians also died in the clashes, which brought Sidon to a standstill.

A security meeting of senior officials headed by President Michel Sleiman backed Monday Army efforts to restore security in the southern city and prevent the spread of paramilitary groups there.

Hundreds of civilians were trapped in the fighting Sunday and Monday with some making appeals on local television stations for the Army to secure a safe passage for them.

An apartment block said to house Assir’s house was set ablaze by rocket-propelled grenades while other buildings and dozens of cars were damaged.

Ambulances and civil defense units were also unable to gain access to the tiny neighborhood.

The Baabda Palace meeting called for measures to evacuate civilians from the conflict zones.

The sources said one of the two civilian fatalities occurred in the Taamir area of the nearby Palestinian refugee camp of Ain al-Hilweh, where militants fought Army positions early Monday in an attempt to relieve the pressure off Abra. Two soldiers were also wounded in that area.

Sources said that a truce was secured in Taamir at around 1.30 p.m.

Khaled Meshaal, the head of Hamas, contacted Monday Speaker Nabih Berri and stressed the need to keep the Palestinian refugee camps neutral from the events in Sidon, Berri’s office told The Daily Star.

Heavy traffic straddled Sidon’s coastal highway from the south in the morning hours as motorists made their way to the Lebanese capital following weekend retreats.

“I felt trapped in my car waiting to get passed the security checkpoint on the seaside road,” one motorist, who wished to remain anonymous, said.

“The sound of gunfire is just non-stop and the smoke over the city can be seen from miles away,” the motorist, speaking from Sidon, added.

Meanwhile, supporters of Assir in north Lebanon protested in front of the residence of caretaker Prime Minister Najib Mikati. Gunmen in the Beddawi area near Tripoli also opened fire and forced businesses to close ahead of plans to block the Abel-Hamid Karami square with burning tires.

The fighting, which the Army said was reminiscent of events preceding Lebanon’s 1975-90 Civil War, highlighted the increasing impact of the conflict in Syria on its small neighbor.

Assir is a staunch supporter of rebels seeking the ouster of Syrian President Bashar Assad and an outspoken critic of Hezbollah.

He had stepped up his rhetoric against Hezbollah, in ferocious sectarian tone, since the powerful group announced in April that it was fighting alongside Assad’s forces.

Photo: Lebanese army soldiers, take their positions behind an armored vehilce, as the lifeless body of a solider lays, background, after clashes between followers of a radical Sunni cleric Sheik Ahmad al-Assir and Shiite gunmen, in the southern port city of Sidon, Lebanon, Sunday, June 23, 2013. A Lebanese security official says clashes have erupted in the south between Lebanese factions supporting opposing sides in the Syrian civil war. Several of Lebanese soldiers were killed and wounded. (AP Photo/Mohammed Zaatari)