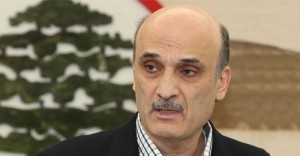 Lebanese Forces leader Samir Geagea said in an interview with Free Lebanon radio station on Monday that the “phenomenon” of Sunni cleric Ahmad al-Assir was a reaction to Hezbollah’s activities in Lebanon, calling on all Lebanese to support the army and state given the clashes in the southern city of Sidon.

“The phenomenon of Hezbollah produced several other phenomenons, including that of Assir.” It is not about [the proliferation of] weapons, but rather mini-states leading to more mini-states,” Geagea said

“Assir is a big problem, but Hezbollah is the one that is taking [Lebanon] as hostage.”

“We are all citizens who enjoy the same rights and duties, but when one citizen sees that another enjoys superiority over him regarding these rights, then he is bound to react against this reality,” he said in reference to Hezbollah.

“Hezbollah has violated all laws and state institutions seeing as it revolts against any political issue that it opposes, which was demonstrated during the May 7, 2008, clashes,” Geagea said

“We believe that the army’s tackling of the situation in Sidon marks the beginning of addressing the possession of illegitimate arms and the presence of ‘statelets’ in Lebanon,” he added

“When a portion of Lebanese believe that they have the right to form an armed group independent of the state, then other Lebanese will follow suit,” he stressed.

“This is the mistake that Assir committed and the only way to end this reality lies in resorting to state institutions, starting with the army,” he said.

“We can no longer tolerate illegitimate arms, whether they are in Assir’s possession or Hezbollah’s,” he said.

Geagea added that the demand to eliminate Assir’s phenomenon should go a step further to include the arrest of those who killed Hashem Salman in front of the Iranian Embassy in Beirut on June 9.

“Tackling one phenomenon and not the other will not end the current situation in Lebanon, because similar armed groups will emerge in the country in the future,” he explained.

“The biggest problem lies in the presence of Hezbollah because failure to tackle this problem will create future ones and we will continue to move from one bad situation to a worse one,” said the LF leader.

“From now on, we will demand that the state perform its duties until the end, which goes beyond ending the unrest in Sidon,” he stressed.

“Where are Salman’s murderers?” Geagea wondered.

Salman, 28, the leader of the student section of the Lebanese Option party , was killed and several other anti-Hezbollah protesters were wounded in the June 9 demonstration, outside the Iranian Embassy in Beirut.

Earlier in the week the leader of the Lebanese Option party Ahmad al-Asaad blamed Hezbollah leader Hassan Nasrallah and senior officials in the Lebanese state for Salman’s killing .

The firebrand Sunni cleric rose to prominence for his outspoken opposition to the regime of Syrian President Bashar al-Assad and his calls for disarming Hezbollah.

Lebanese army commandos seized Monday the Mosque complex belonging to Sheikh Assir in the southern coastal city of Sidon, in the second day of clashes between the military and gunmen loyal to the militant preacher that have claimed the lives of at least 17 soldiers and more than 25 gunmen.