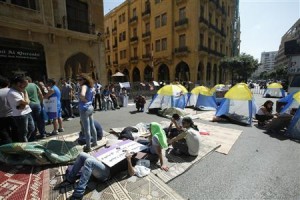 The Lebanese army sealed off Beirut’s parliamentary district with razor wire and threatened stern action against violence on Friday after a night of unrest stoked by the war in Syria and political paralysis at home.

Around 100 protesters, angered by the postponement of June’s parliamentary election until next year, scuffled with police on Thursday night near parliament. Twenty camped out overnight outside the ring of barbed wire, vowing to maintain the protest.

As the largely peaceful demonstration unfolded in central Beirut, protesters blocked roads with burning tires elsewhere in the capital and in Bekaa Valley towns in eastern Lebanon.

Demonstrators said they were acting in solidarity with residents of the Sunni Muslim Bekaa town of Arsal, which they say has been cut off by security forces investigating the shooting of four Shi’ite Muslim men on Sunday.

Sectarian violence has intensified across Lebanon and particularly in the Bekaa region because of the conflict raging across the border in Syria, where Lebanon’s Shi’ite militia Hezbollah and Lebanese Sunni gunmen have joined opposing sides of the 27-month-old civil war.

The army also discovered a rocket launcher in an area east of Beirut on Friday. The rocket was still in place, and apparently had not gone off due to a technical fault, a security source said.

The fighting in Syria has already driven half a million Syrian refugees into Lebanon and worsened a political stalemate which forced the election delay and held up efforts to form a new government. Former Prime Minister Fouad Siniora, a Sunni leader, warned this week of the potential for “state collapse”.

President Michel Suleiman has appealed to Hezbollah to bring its fighters home from Syria, saying that further entanglement there by the Iranian-backed movement will fuel instability in Lebanon, still scarred by its own 1975-1990 civil war.

The army said several military posts and patrols were targeted on Thursday night by protesters, some of them armed, and four soldiers were wounded in exchanges of gunfire.

Security sources said at least two demonstrators were hurt in a protest near the main border crossing with Syria at Masnaa.

“The army leadership again urges citizens to be calm and not to follow rumors and sectarian emotions,” the military said in a statement. “It will not be lenient in confronting with force any outlaws or those who harm the armed forces.”

The statement said gunmen fired on army posts in three towns close to the Masnaa border crossing early on Friday. The army returned fire and arrested 22 suspects in raids following the incidents.

Travelers trying to reach Lebanon from Syria on Friday morning said the frontier was closed for several hours due to the skirmishes, but reopened later in the day.

Army commander General Jean Kahwaji was quoted by the local As-Safir newspaper as saying the military would not tolerate any threats to Lebanon’s security during what he described as “very critical and very difficult” times.

In central Beirut, activists said they would keep up their protest against the 17-month extension of parliament, agreed by politicians after they failed to break a deadlock over planned changes to the electoral law.

“We called for a protest yesterday against the extension and against the violation on Lebanon’s democracy,” protester Marwan Maalouf said. “This is a new coup against the republic.

“Security forces used force against the protesters so we decided to set up tents here in a peaceful way to protest the extension. There is a year and a half, we won’t let them rest.”