Bogdanov: Hezbollah intervened in Syria to save the regime 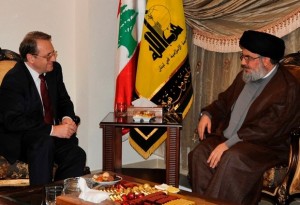 Russia’s Deputy Foreign Minister Mikhail Bogdanov said in an interview with al-Hayat newspaper that Hezbollah Secretary-General Hassan Nasrallah had told him during his meeting last April that the group had decided to step in and assist its allies in Syria only when it realized there was danger the Assad regime would fall.

“Hezbollah leader Sayyed Hassan Nasrallah told me that the decision to intervene in Syria was made after rebels had arrived in Damascus and almost started to celebrate their victory.” Bogdanov said.

Bogdanov stressed the need to quickly transform the conflict in Syria into a political one, adding that “the world has lost one year after the Geneva agreement.”

Bogdanov met on April 28 with Hezbollah’s Nasrallah in Lebanon. Russia’s new alliance with Hezbollah implied according to analysts a Russian commitment to carving out a sphere of influence in the region.

According to analysts Russia’s interest in the outcome of the Syrian civil war stems from three critical interests.

– The naval supply station at Tartus, which supports the expansion of Russia’s naval presence in the Eastern Mediterranean.
– Russia’s fear of the Sunni jihadists who are a key factor in the rebel opposition and with whom Russia has been fighting a brutal war in the northern Caucasus for 20 years.
– The Syrian regime is Russsia’s last main Arab customer for military equipment and is not ready to give it up specially after losing Libya’s $ 4 billion per year military business

Russia , Iran and Hezbollah are the main backers of the Syrian regime in its recent surge against the rebel forces. Russia has been the backer of the regime in Syria ever since the the uprising against the regime started in March 2011. For this reason the West , according to analysts does not trust Russia when it calls for transforming the conflict in Syria into a political one, because its main goal is to preserve the Syrian regime in order to protect its own interests.