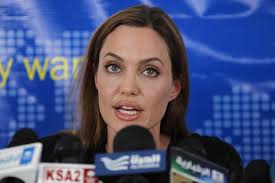 Speaking at a news conference in a refugee camp in Jordon she said: “I appeal to the world leaders to please set aside your differences, unite to end the violence, make diplomacy succeed.”

“The UN Security Council must live up to its responsibilities,” she added.

The number of people fleeing the conflict in Syria has reached 1.6 million, according to the latest figures from the United Nations.