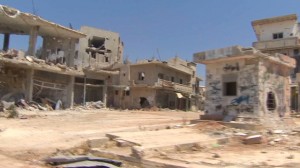 Only a few people can be seen scavenging through the rubble hoping to find anything worth salvaging from the carcasses of residential buildings in this war-ravaged city in western Syria.

But there isn’t very much to salvage after a major government offensive ousted rebels from the city, which is strategically located near the border with Lebanon and very close to the main highway connecting Damascus to Syria’s coast and to northern cities like Aleppo.

“Of course we want to come back here,” an elderly man told me. “We are hoping for government support to make this Qusayr worth living in again.”

The man’s name is George. He said his family have just returned after fleeing to the city of Homs when rebels took over the town more than a year ago. George was cleaning up his house and led me through ransacked rooms.

“They stole everything,” he said. He means the anti-government forces, whom the Assad government labels as terrorists but are supported by many Western and Middle Eastern countries.

George then showed me a hole in the roof.

“Rocket.” That was his only word as we looked up at the sun that now shone in through the gap in his ceiling.

The opposition took over control of Qusayr in February 2012. The town became an important supply hub for weapons for rebel fighters in central Syria because of its proximity to the Jordanian border. It is also important for the government because it is located near a vital supply line for the Syrian military fighting in Idlib, Aleppo and other places in the region.

After a long siege of the city by pro-Assad forces, Syria’s military enlisted the help of Hezbollah, the radical Islamist Shiite militia from Lebanon. Assad’s army and Hezbollah forces launched an offensive in early June of this year and re-took Qusayr on June 5.

But the cost of re-taking the city was clearly immense. Driving through town we could not find a single building left unscathed. In the central square, the iconic clock tower was destroyed. An ancient mosque had also suffered several direct hits with a gaping hole left in the minaret. And the city’s only church had substantial damage both inside and out with some of the icons defaced. Syrian military personnel on the ground claim Islamic rebels are to blame.

A senior commander later showed us on a map how the army moved into Qusayr. “First we surrounded the city and then we attacked it from all sides. And of course we killed a lot of them and there were a lot of wounded,” he recalled.

“The rest of them ran away through the valleys and the mountains, mostly to Lebanon. And now we can announce that Qusayr and its suburbs are totally cleansed of Islamist fighters.”

The town might be “cleansed,” as the officer put it, but in many places in and around Qusayr, the earth is literally scorched.

Most of those now returning to the town are Christians, highlighting the increasingly sectarian nature of the conflict in Syria. George is a Christian as well. He says his son was kidnapped by Islamist fighters and he clearly blames some of his Sunni Muslim neighbors for collaborating with the opposition.

“We have been living with the Muslims for generations,” his wife said as we stood in their ruined apartment. “I don’t know why they did this, why they helped them.”

George also took us to his brother’s house, which was almost razed to the ground. Many of the rooms were burned from the inside. George said his brother fled when one of his sons was killed by rebel fighters.

“My brother is an engineer. His son came to the door and they shot him because they think all Christians are against them,” George tells me.

Both George and his wife say they could forgive their neighbors but it is hard to see how this community, which before the crisis was majority Sunni Muslim with a substantial Christian minority, could ever go back to what it used to be, even if more people return.

The opposition has called the Syrian military’s offensive a massacre and called for the international community to intervene. Meanwhile the Assad government blames the rebels for the carnage in Qusayr and says it intervened because of pleas from the population.

No matter who is at fault, Qusayr is completely destroyed — a once peaceful community on the Syrian-Lebanese border that might never be restored again.