by yalibnan
514
Lebanon, a country of 4 million people, officially hosts 546,000 Syrians who have fled the conflict, most in the last five months. The Lebanese government estimates that there are an additional 500,000 who have not registered.
Share: 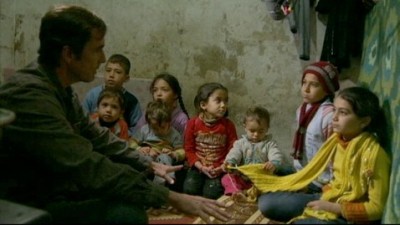 ZAHLÉ, Lebanon — MY eyes kept being drawn to the shoes. The tiny pink running shoes with Velcro straps, on the feet of the 2-year-old girl sitting quietly on her mother’s lap. She fidgeted only a bit — jostling occasionally with her 7-year-old twin sisters while her father told a United Nations worker what had driven his young family 20 miles from Syria to this small town in Lebanon. They did not merely leave; they fled. And not once, but three times.

They came from Zabadani, which sits in a green valley in southwest Syria, just 20 miles from Damascus. He was a house painter who made a modest living while his wife took care of their three daughters. Their life began to fall apart in early 2012, when their house was destroyed amid fierce battles between rebel and government forces for control of their city.

They fled up a hill, to the nearby ancient town of Bloudan. They found refuge with an elderly man who shared his home with them for more than seven months. When their safety was threatened again, they fled farther toward the border with Lebanon. When the conflict followed them again, they crossed over it. They now live in two small rooms in a town in the Bekaa Valley, while their modest savings are drying up. And they consider themselves the lucky ones.

Lebanon, a country of 4 million people, officially hosts 546,000 Syrians who have fled the conflict, most in the last five months. Tens of thousands registered with the United Nations in just the last two weeks. The Lebanese government estimates that there are an additional 500,000 who have not registered.

Lebanon is home to the most Syrian refugees, but other countries host staggering numbers: 478,000 in Jordan, 386,000 in Turkey, 158,000 in Iraq and 81,000 in Egypt, according to United Nations estimates. (Again, the true numbers may be higher.) Caved-in roofs, pockmarked walls and collapsed houses in villages along the Lebanese-Syrian border are testament to the war’s steady creep into Lebanon. So, too, are the funeral processions, the increasing numbers of wounded streaming into hospitals, and the road blockades, sniping and open gun battles that flare in Tripoli, Sidon and in parts of the Bekaa Valley.

The image of refugees is often of people living in crowded camps where life is grim. But in fact most of the world’s refugee population lives outside camps — in towns, villages and big cities. Here in Lebanon they are scattered across some 1,400 locations, in some of the most economically and socially depressed areas of the country.

They are putting enormous pressure on water, sanitation, education and health care systems. Wages are plummeting. Lebanese workers complain that they can no longer find jobs, which Syrians will do for much less. Poor Lebanese envy the international food, shelter and medical aid given to the refugees. Shopkeepers resent the competition brought by new Syrian-run establishments that they say are undercutting prices.

The anger could boil over. Already there have been curfews imposed, and sporadic attacks against refugees.

The Lebanese government is effectively paralyzed, with consensus on a new government formation stalled. Government ministries and humanitarian agencies are struggling to cope with the Syrians who now make up one-quarter of the population in Lebanon. And with less than 30 percent of needed funding secured, ever more serious human hardship and instability are on the horizon. Lebanon is bracing for more than one million additional Syrian refugees by year’s end.

Today, World Refugee Day, Lebanon stands as an example of generosity in the face of crisis. Despite misunderstandings and tensions, everyday acts of kindness are commonplace. “You call them refugees,” one mayor in southern Lebanon told me. “We call them neighbors.” Another mayor whose town was filled with Syrian refugees said to me, plaintively, “This is a call for rescue. Can anyone hear it?”

We shall see. The United Nations and the Lebanese government recently appealed for $1.7 billion. More than half of it would pay for community-level projects: improvements to water and waste management, crumbling schools and fragile health services. This goes beyond a traditional humanitarian appeal for food and basic necessities. It aims to put in place an infrastructure to handle the refugee influx while also benefiting the Lebanese. It would deliver benefits beyond what can be provided in refugee camps. And it requires a deeper commitment from donor countries than has so far been seen.

Without more international support, the patience and hospitality of host communities may wear thin. Continuing neglect will stoke rising tensions and raise the risk that the two-year-old Syrian civil war will become a regional conflict.

The little girl I met, the one who swung her legs and shoes, turned her focus to her mother’s wallet, peeking curiously inside. There was nothing in it. He mother gave me a sad smile. “The war emptied it for us,” she said.

*Ninette Kelley is the representative in Lebanon of the United Nations High Commissioner for Refugees.

First published in the NewYork Times