Iran to send 4,000 troops to Syria to aid Assad forces

Iran will send 4,000 of its troops to Syria to aid president Bashar al-Assad’s forces in its fight against rebels, according to the UK’s Independent newspaper.

As well as sending Revolutionary Guards, Iran has reportedly proposed to open a “Syrian front” against Israel in the Golan Heights.

The decision was reportedly made before Iran’s presidential election, and came as the US approved a move to arm the Syrian opposition.

It compounds fears that the Syrian conflict is taking on broader regional and sectarian dimensions.

Iran is a predominantly Shiite Muslim country and a staunch ally of Mr Assad, who belongs to the Alawite sect, an offshoot of Shiite Islam.

The rebellion in Syria is largely Sunni.

The rebels, meanwhile, are reportedly getting military support from Sunni-led Saudi Arabia, which plans to supply them with anti-aircraft missiles to counter the regime’s air force.

Britain and Russia at odds over Syria 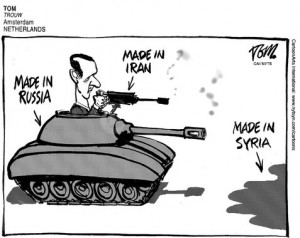 Russia, a long time backer of the Syrian regime, is sceptical about US accusations that the Syrian military has used chemical weapons against the rebels.

After the meeting in London, Mr Putin said Russia wanted to create the conditions for a resolution and urged Western countries to abandon their plans to arm the rebels fighting against the Assad regime.

“One does not really need to support the people who not only kill their enemies, but open up their bodies, eat their intestines in front of the public and cameras,” he said.

“Are these the people you want to support? Are they the ones you want to supply with weapons? Then this probably has little relation to the humanitarian values preached in Europe for hundreds of years.”

The incident Mr Putin referred to was most likely that of a rebel commander filmed last month cutting into the torso of a dead soldier and biting into a piece of one of his organs.

Mr Cameron says he blames the Assad regime and not its ally Russia for the ongoing violence, despite the supply of arms from Moscow.

He says the UK has still made no decision on whether to supply weapons to the rebels.

“What I take from our conversation today is that we can overcome these differences if we recognise that we share some fundamental aims: to end the conflict, to stop Syria breaking apart, to let the Syrian people choose who governs them and to take the fight to the extremists and defeat them,” he said.

Now that the US is taking moves to arm the Syrian opposition and Mr Cameron himself insisting that more must be done to help them, Moscow might now go ahead with its plans to provide sophisticated new air defences to the Syrian regime.

There has been a cautious international response to the election of moderate cleric Hassan Rowhani as the next president of Iran.

Mr Rowhani has pledged greater engagement with the West, a move which has been welcomed by the United States, Russia and Britain.

Australia has also welcomed the new president and urged him to return to constructive talks on the country’s nuclear program.

But Israel has voiced its ongoing concern.

His intelligence minister Yuval Steinitz was even less optimistic about Mr Rowhani, telling Israeli media he is not a moderate figure at all.

He said the international community must not be deluded and there was no reason to alleviate pressure on Iran, but rather sanctions should be tightened.

Several Iranian newspapers described the victory of the reformist-backed candidate as the return of hope.

Tens of thousands of people celebrated on the streets of the capital Tehran throughout the night after hearing the election result.

The past eight years under former President Mahmoud Ahmadinejad have seen Iran isolated on the international stage and engulfed in an economic crisis, mainly the result of international sanctions.