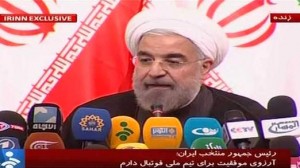 Iran’s newly-elected president Hassan Rouhani has said he will follow a “path of moderation”, but that there will be no end to uranium enrichment.

In his first news conference, the reformist-backed leader set out how he intends to govern since being voted in with a landslide on Friday.

Mr Rouhani said he will pursue constructive interaction with the world and hopes all countries will use the opportunity of his election to seize a new chance of friendly relations.

But he stopped short of saying that Iran would end its programme of uranium enrichment, which the West says is part of a plan to develop nuclear weapons.

He also called for an end to the sanctions placed on Iran by the West that have crippled the Iranian economy.

He said: “We are ready to show greater transparency and make clear for the whole world that the steps of the Islamic Republic of Iran are completely within international frameworks.”

He urged his country not to be held back by past policies, emphasising messages from Western leaders since his victory that had brought hope of new openings with Tehran.

But he sidestepped the issue of Iran’s close alliance with Syria’s Bashar Assad, saying that the efforts to end the civil war and restore stability rested with the “Syrian people.”

Iran’s president does not have authority to set major policies such as the direction of the nuclear program or relations with the West.

All such decisions rest with the ruling clerics and the powerful Revolutionary Guard, which have so far appeared to embrace Mr Rouhani.

He can, however, use the strength of his landslide victory and his influential connections, including former President Akbar Hashemi Rafsanjani, to try to sway policies.

He also will serve as Iran’s main international envoy and is almost certain to present a different tone than his combative predecessor, Mahmoud Ahmadinejad, who formally gives up power in August.

Mr Rouhani described his election as opening a “new era” and said he would “follow the path of moderation and justice, not extremism.”

Previously, Mr Rouhani – a former nuclear negotiator – has criticised Iranian positions that have led to increased sanctions, but he also described the pressures by the US and others as “oppressive.”

He said: “The Iranian nation has done nothing to deserve sanctions.

“The works it has done has been within international frameworks . If sanctions have any benefits, it will only benefit Israel. It has no benefits for others.”

He promised to encourage “step by step” measures to reassure the West over Iran’s nuclear ambitions.

On Syria, he said the ultimate responsibility to resolve the more than two-year-old civil war should be in the hands of the “Syrian people.”

“We are opposed to foreign intervention,” he said. “We hope peace and tranquility will return to Syria through the cooperation with countries of the region and world.”