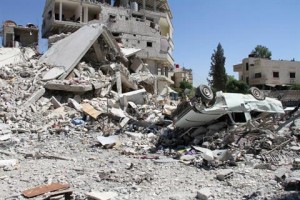 A huge blast has been reported in the western Mezzeh suburb of the Syrian capital Damascus.

Unconfirmed reports said around 20 soldiers were killed or wounded in the explosion.

Mezzeh military airport is an important strategic installation and plays a significant role in distributing the government’s military supplies.

Activists said a big fire was raging inside the airport and that ambulances were heading to the scene.

The UK-based activist group, the Syrian Observatory for Human Rights (SOHR), said that a car bomb had been detonated targeting a military checkpoint near the airport.

The group, which has a network of informants on the ground, said there had been some 20 military casualties.

Mezzeh military airport is an important buffer between several outlying suburbs to the south-west, which are largely in rebel hands, and the core of the city including the nearby presidential palace, the BBC’s Jim Muir reports from Beirut.

In recent weeks, government forces have pushed the rebels back from many of the suburbs ringing the capital.

If the airport was the target of a car bombing, it will not bring the rebels any closer to over-running the city centre, which at present they are not in a position to do, our correspondent adds.

Last month, Syria accused Israel of launching rocket attacks on a military facility near Damascus and on a shipment of missiles near the Lebanese border.

Mr Morsi had joined a “chorus of conspiracy and incitement led by America”, an “official source” told the state-run Sana news agency.

Mr Morsi announced that Syria’s embassy in Cairo would be shut and Egypt’s representative withdrawn from Damascus. He also called on the international community to impose a no-fly zone over the country.

Addressing a rally in support of the Syrian opposition on Saturday, Mr Morsi went on to call on the Lebanese Shia movement Hezbollah to withdraw from the fighting in Syria.

Some Sunni Muslim clerics have urged support for rebels in Syria.