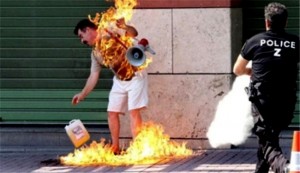 The doctor of a Jordanian man who set himself on fire to draw attention to his plight as an orphan says he has died of his burns.

His friend, Alaa Tibi, says Robin wanted Abu-Hassan to remove a state code used to identify orphans from his national identification card, saying it was discriminatory and prevented him from finding a job. The code allows orphans access to welfare and other benefits.

He said Robin also wanted state housing, health insurance and an increase in his monthly welfare paycheck from 100 Jordanian dinars ($142).