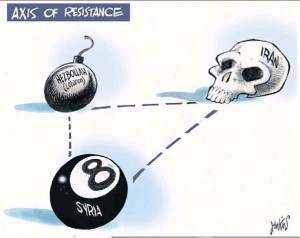 The Iran-Syria-Hezbollah axis is showing cracks, but until the Syrian rebels unite and receive a steady supply of weapons, Syrian President Bashar Assad has high chances of survival, the former head of the IDF Intelligence Directorate, Amos Yadlin, was reported as saying by Israeli newspaper Times of Israel.

“This development [cracks in the axis] is beneficial for Israel, but the price is sporadic terrorist activity in the Golan Heights,” Yadlin was quoted as saying , during a Channel 2 interview.

“If Assad survives, it will be a clear victory for Iran. It will be a catastrophe for us and for the West,” Channel 2′s Arab Affairs correspondent Ehud Ya’ari was quoted as saying ,in the same discussion, adding that he belongs to the camp that believes “better the devil you don’t know than the devil you do.”

Ya’ari also pointed to problems within the axis, most notably Hezbollah’s precarious position amid harsh criticisms of the militant group by Sunni commentators and clerics.

“Hezbollah is in a pickle. There is a change of perception about the so-called “resistance group” in the Arab world. Its standing is taking an enormous hit,” Ya’ari said

The Syrian revolution began with peaceful demonstrators asking for democracy and a decent life. It was closer to the velvet revolutions of eastern Europe than the civil war in Libya. Assad’s forces responded by mowing down, raping and castrating the protesters, according to observers.

Syrian rebels briefly captured a crossing point along a cease-fire line with Israel in the occupied Golan Heights. It was later recaptured by the Syrian government troops, but the fighting prompted Austria to announce it was withdrawing its peacekeeping contingent from a UN force that patrols the Israeli-occupied area.