Russia detains over 300 Muslims during prayer 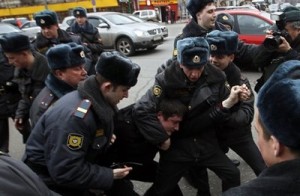 MOSCOW – In a new crackdown on Russian Muslims, Moscow police have detained more than 300 worshippers after rounding them up during prayer at a Muslim prayer room in the Russian capital.

“The situation in the North Caucasus should be kept under particular control,” President Vladimir Putin told a meeting of security force officers, Reuters reported on Friday, June 7.

“The policy in the fight against corruption, crime and the insurgency has to be carried out harshly and consistently.”

In a raid carried on Friday, the forces detained 300 Muslims, including 170 foreigners, without disclosing reasons behind their arrest.

Friday’s raid is the third targeting Muslim places of worship in Moscow or St Petersburg this year.

It comes as Russia prepares for next year’s Winter Olympics in the Black Sea resort of Sochi.

The Russian Federation is home to some 23 million Muslims in the north of the Caucasus and southern republics of Chechnya, Ingushetia and Dagestan.

Russia is struggling to extinguish an insurgency that stems from its two devastating wars against separatists in Chechnya, just east of Ingushetia and North Ossetia, and has been fuelled by chronic unemployment, police brutality and poverty.

Militants fighting for an Islamic state in the mountainous region have increasingly targeted Muslim leaders who are backed by the Russian authorities.

Two decades after a territorial dispute erupted into a brief war in 1992, there is also lingering tension between mostly Christian North Ossetia and mostly Muslim Ingushetia, but there was no indication the shooting was linked to that conflict.

OLIslam
Photo: Muslim places of worship in Moscow and St Petersburg have been targeted by Russian police . In a new crackdown on Russian Muslims, Moscow police have detained more than 300 worshippers after rounding them up during prayer at a Muslim prayer room in the Russian capital.