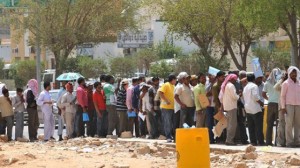 RIYADH, Saudi Arabia – Some 180,000 illegal foreign workers have left Saudi Arabia since April 1 under an amnesty that allowed them to try to sort out their papers or leave without paying a penalty, a report said on Sunday, June 9.

“Between the beginning of April and the start of June, 180,000 foreigners left the kingdom for good,” Okaz daily quoted Badr Malek, spokesman for the passports department, as saying.

This wave brings to 380,000 the number of foreign workers who have left Saudi Arabia since the beginning of the year.

Malek stressed that violators of immigration rules in the oil-rich kingdom will face penalties when the amnesty period ends on July 3, with punishment including imprisonment up to two years, and fines up to 100,000 riyals ($27,000).

According to official statistics, eight million expatriates work in the kingdom. Economists say there are another two million unregistered foreign workers.

Saudi Arabia is aiming to create job opportunities for its unemployed nationals through cutting the number of foreign workers, although many of those are in low-paid jobs that Saudis would not accept.

The world’s largest oil exporter is a goldmine for millions of people from poor Asian and Arab countries that are reeling under high levels of unemployment.

Hundreds of female expats working in schools and salons have been excluded from Saudi Arabia’s amnesty on illegal workers, raising fears they will be deported.

Many women in the kingdom on their husbands’ or fathers’ sponsorship work in places such as private schools, retail and homes without the permission of the government, which does not allow dependants of foreign workers to also be employed.

Many private schools claim they would be forced to shut down because they relied on the female employees.