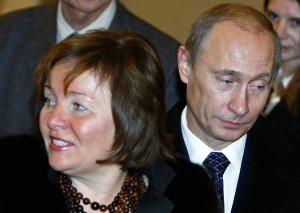 Russian President Vladimir Putin and his long-suffering wife, Lyudmila, are ending their nearly 30-year marriage, they announced on state television Thursday in a tone of mutual indifference.

“We practically never saw each other,” Putin told a reporter from the Rossiya 24 network as he and his soon-to-be-ex-wife departed a Kremlin ballet performance. “To each his own life.”

Russia’s first couple gave little explanation of why they chose to end the marriage now, other than the president’s assertion that “it was our joint decision.”

Lyudmila Putina, who met her then-KGB agent husband while working as a flight attendant for Aeroflot, said only that she didn’t like the publicity or the air travel involved in her role as first lady.

The apparently staged announcement in a Kremlin reception room was a stunning departure for the 60-year-old president, who has so painstakingly kept his personal life out of the public eye that not a single photograph of his two adult daughters is known to have appeared in Russian news media.

Those curious about what prompted the breakup won’t have to wait for a tell-all book: Putina dished the dirt on her husband more than a decade ago.

In the 2002 biography, “Vladimir Putin: The Road to Power,” the president’s wife conveyed a litany of grievances about him, an accumulation dating back to the earliest days of their courtship.

Biographer Oleg Blotsky recounted the emotional wounds Putina suffered from her husband’s absences, inattention and habitual tardiness. When they were dating in the early 1980s in Leningrad, now called St. Petersburg, Putin would routinely leave her waiting for more than an hour at appointed meeting places in grubby subway stations, Putina told Blotsky.

“The first 15 minutes would pass normally, and even a half-hour would be OK. But after an hour, I would nearly cry out of humiliation,” she recalled of a three-year courtship. “His excuse was always that he had been held up at work, for which, by the way, he was always very punctual. But in his personal life he was sloppy.”

Putina, now 55, also told Blotsky that Putin lied to her about his espionage work for the first 18 months she knew him, that he would criticize her cooking when his late arrival meant the meat was dry and that he was away on a business trip when their first child was born, forcing her to hail a cab for the hospital while in labor.

The couple’s infrequent public appearances have sparked wild media reports and speculation. One particularly steady rumor asserts that Putin, following czarist tradition, sent his wife to live in a remote monastery in western Russia. Another held that he had a long-running affair with lawmaker and former Olympic gymnast Alina Kabaeva, which Kabaeva has denied.

The purportedly spontaneous television interview at the Kremlin exhibited fresh evidence of a relationship that has been more formality than fulfillment.

Both noted their daughters, Maria and Yekaterina, now in their late 20s, as a reason for calling it quits less than two months before their 30th anniversary.

“This really was our mutual decision,” Putina said, thanking her husband for his support, as if winding up an unsuccessful political campaign.

“You could say it’s a civilized divorce,” she concluded, as the president nodded sagely in agreement.