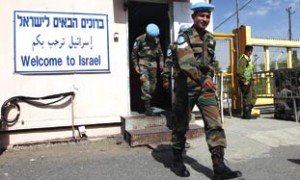 Syrian forces loyal to President Bashar al-Assad fought off an attempt by rebels to seize the sole crossing between Syria and Israel on Thursday, while army troops sought to ram home strategic gains further to the north.

A day after losing control of Qusair, an important town close to the Lebanese border, rebels tried to grab back the initiative with an assault on Quneitra – a demilitarized zone on the Golan Heights that is patrolled by the United Nations.

For the first time since the start of the uprising in March 2011, the rebels briefly took control of the area, sending U.N. peacekeepers scurrying to their bunkers. Israeli sources said Syrian forces wrested back the site after fierce fighting.

Austria said it would withdraw its 380 peacekeepers from the 1,000-strong U.N. monitoring force because of the fighting.

Pro-government troops have won a string of successes in recent weeks, boosting Assad at a time when the United States and Russia are struggling to organize a peace conference aimed at ending the civil war, which has killed more than 80,000.

Activists pushed out of the devastated town of Qusair this week issued a desperate plea for help, saying they were cornered by both Syrian troops and their powerful Lebanese allies, the Shi’ite guerrilla force Hezbollah.

“God has given us the strength to persevere, but until when only God knows. We beg you to move as quickly as possible to rescue us,” said a message posted on social networking sites.

France, which earlier this week accused Assad of deploying nerve gas in the civil war, said on Wednesday the situation on the ground needed to be rebalanced after the fall of Qusair, but did not say how that could be achieved.

Russia said on Thursday it was worried that allegations of gas attacks might be used as a pretext for foreign intervention.

“I do not rule out that somebody wants to use it to state that a red line has been crossed and a foreign intervention is necessary,” Russian Foreign Minister Sergei Lavrov told a news conference in Moscow with his German and Finnish counterparts.

Western countries have so far shown little appetite for getting sucked into the Syrian quagmire, but there is also a clear aversion to letting Assad, heavily backed by Shi’ite Iran and their Hezbollah associates, emerge victorious.

France and Britain last month pushed the European Union to drop its ban on arming the rebels, who are mainly Sunni Muslims. London and Paris have not yet said if they plan to arm the fighters but wanted the ban lifted to apply pressure on Assad.

Syrian troops, buoyed by their success in Qusair, much of which was reduced to dust and rubble, sent artillery rounds flying into surrounding villages, where many rebels are hiding.

Qusair lies along an important corridor through the central province of Homs, linking the capital Damascus to the coastal heartland of Assad’s minority Alawite sect, an offshoot of Shi’ite Islam.

Many opposition fighters and civilians are believed to have fled to the villages of Debaa, 5-km (3 miles) northeast of Qusair, and Buwayda another 7-km in the same direction. A Reuters photographer reported heavy fighting in both places.

“We have a large number of civilians and wounded in Buwayda,” said activist Mohammed al-Qusair

The International Committee of the Red Cross (ICRC) said it was negotiating with Syria to reach areas surrounding Qusair to deliver medical assistance to the wounded. Humanitarian groups have estimated that up to 1,500 people might need help.

“We have material, medical supplies for distribution in public health centers and hospitals,” said ICRC spokesman Alexis Heeb in Geneva, adding that Qusair itself appeared deserted.

“Today the conflict is extremely fragmented and this is one of the biggest operational challenges for the ICRC.”

With sectarian divisions deteriorating, the leader of Sunni Islamist group Al Qaeda, Ayman al-Zawahri, urged Syrians to unite against Assad and thwart what he called U.S. plans to set up a client state in Syria to safeguard Israel’s security.

Washington and its allies which have backed the rebels have become alarmed in recent months by the rise of a rebel group that pledged its loyalty to al Qaeda.

Israel’s military picked up two wounded Syrians after the clashes on the Golan Heights and transferred them to hospital for treatment, a military spokeswoman said.

Israel is worried that the Golan, which it captured from Syria in 1967 and fought over again in 1973, will become a springboard for attacks on Israelis by jihadi fighters who are trying to topple Assad.

The rarely used Quneitra crossing is the only transit point between Syrian and Israeli disengagement lines set in 1974 and Thursday’s battle will further heighten concerns in Israel about the worsening security environment.

The United Nations Disengagement Observer Force (UNDOF) is meant to police the peace but has been largely ineffectual during the civil war. Israel however is keen to maintain an international presence in the area and has urged countries contributing to the force not to quit, despite the dangers.