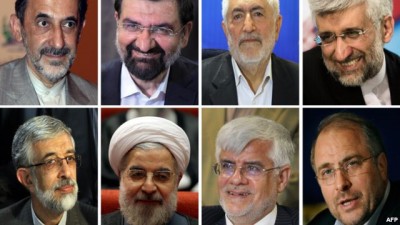 Iran’s first debate between candidates for the presidency degenerated into acrimony live on state television on Friday when, instead of discussing the economy, some of the hopefuls resorted to sniping over the questions and format.The testy exchange between the moderator and reformist Mohammad Reza Aref, moderate Hassan Rohani, and conservative Mohsen Rezaie was the subject of wide ridicule by Iranian viewers who had tuned in for the four-hour discussion.

They were among eight candidates for the June 14 vote presenting their ideas on an economy buffeted by international sanctions over Iran’s disputed nuclear program, rising unemployment, and inflation running at over 30 percent, according to official figures.

The series of three debates are central to trying to build public interest in the presidential vote, the first since 2009, which unleashed months of protests by those who said Mahmoud Ahmadinejad’s win was fraudulent, demonstrations that were eventually crushed by security forces.

The economy is likely to weigh heavily on Iranians’ minds when they head to the polls. Although most major state policies, such as the nuclear issue, are ultimately decided by Supreme Leader Ayatollah Ali Khamenei, Iranian presidents traditionally have greater sway in enacting their economic agendas. 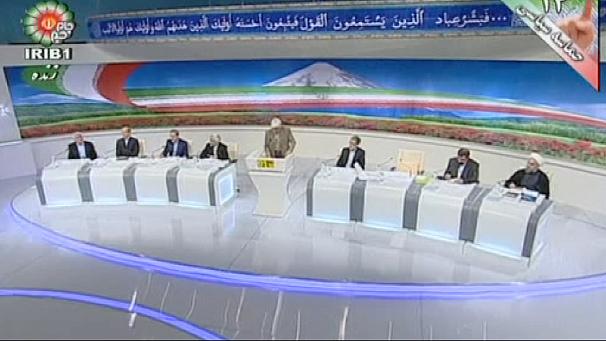 The debate’s first half allowed the eight to give a three minute answer, with a 90 second response from the other seven. Then moderator Morteza Heydari asked them an economic question that could only be answered yes, no or with an abstention.

One question was: If you want to select an official for your administration, what is their most important quality? Candidates could choose between a lack of corruption, experience, expertise or prudence.

They were also presented with pictures, such as an agricultural scene, a market, or a cargo ship, and asked to say whatever came to mind.

The three, seated with their colleagues in a line of desks in front of a backdrop of flowers and rolling woodland, said the format was farcical and did not allow them to present their plans to the country or engage in dialogue with each other.

Several times they simply refused to answer the question.

“In honor of the dear people of my country I will sit here, but I will answer none of your test questions,” said Aref, gesticulating with his pen towards the moderator standing in front of an image of Khamenei.

“I am a patient person and I can tolerate a lot,” added Rezaie. “With these repetitive, discontinuous, short, one-to-three minute answers, the people are being harmed and the eight people up here are being insulted.”

Rohani, the most prominent moderate candidate in an election dominated by hardliners, said: “People will see this style of debate as insulting.”

Iran’s clerical rulers are keen to secure a high turnout that would underpin their legitimacy. They are also wary of a repeat of 2009’s protests, and the debate was a rare unscripted moment in an election authorities hope to tightly control.

Iranians spoken to by Reuters were dismissive of the way the debate played out.

“Compared to the debates four years ago, where each candidate could discuss issues in more detail, this one was really bad,” said Neda, 27, in Tehran. “They didn’t have enough time to go into any details. I know nothing more about them now than before this debate.”

“It was not properly planned at all. Candidates didn’t have time to go into details and therefore their answers were very vague,” said shopworker Ali, 27, by phone from Tehran.

Neither would give their surnames for fear of reprisals for criticizing the government and speaking to a foreign reporter.

The presidential debates in 2009 drew similar attention, although then it was more for the personal insults.

“After what came to pass in the heated 2009 debates, the leadership in Tehran has decided to dumb down the process to a point where it now borders on ridicule,” she said.

In the more orderly first half, the candidates agreed Iran’s economy was in crisis and there was a need for greater support for domestic production, though they offered few specifics.

They were also nearly unanimous in criticizing Ahmadinejad’s economic management, particularly his government’s method of implementing ambitious subsidy reforms, which they said had raised inflation.

Several spoke of the need for more resistance to sanctions. Velayati said changing foreign policies would have an impact, although he did not say what he would change.

Qalibaf, who enjoys a reputation as a pragmatist, gave some of the most specific policy plans.

His government would increase the independence of the central bank, attempt to grow Iran’s service economy, for instance in the information technology sector, and refrain from hasty decisions that create instability, he said.