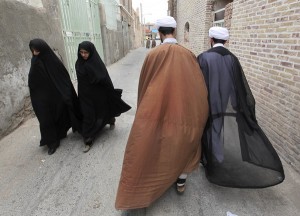 “This mass disqualification including that of women wishing to stand in the presidential elections is discriminatory and violates the fundamental right to political participation,” UN special rapporteur on the human rights situation in Iran Ahmed Shaheed said in a statement.

On May 21, Iran’s Guardian Council, an unelected watchdog controlled by religious conservatives tasked with vetting candidates, approved only eight of the 686 people registered to stand in the June 14 presidential election.

All 30 women candidates, as well as a number of key political figures, were disqualified.

Since its 1979 Islamic revolution, Iran has rejected all female candidates for the presidency, although women have been allowed to stand in parliamentary elections and to serve as lawmakers.

“Any restrictions on this right (to stand as a candidate) must be based on objective and reasonable criteria without distinction of any kind, including race, gender, religion and political or other opinion,” Shaheed insisted.

Kamala Chandrakirana, who currently heads the UN Working Group on Discrimination against Women, also criticised the decision, stressing that excluding women from running for president violated the International Covenant on Civil and Political Rights.

“This will exacerbate their already existing severe underrepresentation in public, political and professional life,” she warned in the joint statement.

UN Special Rapporteur on freedoms of peaceful assembly and association Maina Kiai meanwhile urged Tehran to release the more than 40 journalists held in Iranian jails, as well as the two main opposition leaders, Mehdi Karoubi and Mir Hossein Mousavi, who have been under house arrest since February 2011.

She also called for the release of “hundreds of other prisoners of conscience who remain in prison for peacefully exercising their rights to freedoms of opinion, expression, association and peaceful assembly.”
AFP

Photo: In this picture taken on Tuesday, May 6, 2013, two Iranian clerics, right, and two women walk in an alley of the eastern city of Birjand, Iran.  All 30 women  presidential candidates were disqualified by Iran’s Guardian Council, an unelected watchdog controlled by religious conservatives.(AP Photo/Vahid Salemi)