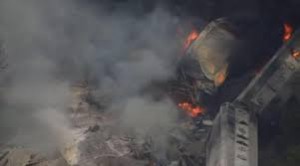 A CSX freight train collided with a commercial truck and derailed in the Baltimore area Tuesday, officials said, seriously injuring the truck’s driver and leading to an explosion that a witness said could be felt blocks away.

The crash happened in Rosedale, just to the east of Baltimore, firefighter Jonathan Meehan of Baltimore County said. The truck driver was taken to a hospital and is in serious but stable condition.

An explosion and fire followed, sending up plumes of black smoke.

But officials said there was little cause for concern.

“CSX indicates that there is no toxic inhalants, so we do not believe there is any substantial risk to the community,” Baltimore County Executive Kevin Kamenetz told reporters.

He said multiple buildings were damaged.

The fire continued to burn, but firefighters were working to put it out, said Baltimore County Fire Chief John Hohman.

As a precaution, authorities asked residents in some 60 to 70 homes to evacuate if they felt unsafe.

“We’re going to look at establishing a shelter here in Rosedale. We’ll provide transportation, but it’s all voluntary,” Hohman said.

The cause of the accident was not immediately clear. The National Transportation Safety Board is sending a team to investigate.

Video from CNN affiliate WBAL showed at least five of the train’s cars off the track, and white and black smoke rising in separate columns from the wreckage.

Kevin Lindemann told CNN he was working in Baltimore Windustrial, a plumbing supply warehouse along the track, when he felt something “like an earthquake.” He went to a window.

“The first thing you see is two or three train cars flipped over the side, sliding down the track,” said Lindemann, a sales representative at the warehouse, which he said is a few blocks from the nearest train-road intersection.

Seeing one of the train’s cars on fire, Lindemann and the other people in the warehouse left the building and drove away. The explosion happened after he and the others congregated a few blocks away, he said.

“I couldn’t see (the explosion) directly, but it was deafening,” he said. “It almost forced you to your knees. There were a couple people that were knocked down by it.”

The warehouse appeared to be damaged from the blast, Lindemann said after seeing aerial video of the crash site on TV.

CNN iReporter Charlotte Curtis sent video of thick smoke with sirens wailing in the background. She said she was walking her puppy when she heard a big boom.

The puppy went down on her belly, scared.

“It was huge, louder than any race car. It felt like it just knocked me in my back,” Curtis said.