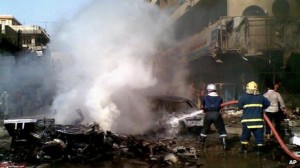 At least 33 people have been killed in a series of explosions in the Iraqi capital, Baghdad, police say.

Many more were wounded in the car bomb attacks, targeting mainly Shia districts of the capital, according to officials.

The violence comes amid a recent marked rise in attacks linked to growing political and sectarian tension.

The bloodshed has raised fears of a return to the levels of sectarian violence seen in 2006 and 2007.

Monday’s bombings come a week after more than 70 people were killed and many others injured in a series of attacks across the country, in what was described as one of the worst days for sectarian violence in Iraq for several years.

One bombing struck the busy commercial Sadoun Street in central Baghdad. One bystander who saw that attack, Zein al-Abidin, said a four-year-old child was among the victims. “What crime have those innocent people committed?” he asked.

No group has said it carried out the attacks, but tension between the Shia Muslim majority, which leads the government, and minority Sunnis has been growing since last year.

Mr Maliki has vowed to make immediate changes to Iraq’s security strategy, saying militants “will not be able to return us to the sectarian conflict”.

Estimates put the number of deaths this month at more than 450 – the second consecutive month during which more than 400 people have been killed.