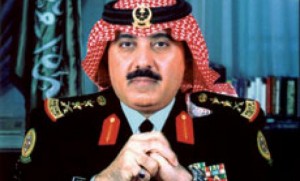 Saudi Arabia’s King Abdullah named his son Prince Miteb bin Abdullah minister of the National Guard, as part of a push to elevate a younger generation of royals to senior positions amid turmoil in the Middle East.

King Abdullah, who is 89 this year, turned the National Guard presidency into a Cabinet post, Saudi state TV reported today, citing a royal decree. Prince Miteb was the commander of the 110,000-men National Guard and a state minister before the decree.

The Saudi monarch is promoting a younger generation of royals into senior positions as the world’s largest oil exporter confronts unprecedented political instability in the Middle East and economic changes at home.

In November, Mohammed bin Nayef, a nephew born in 1959, was appointed as interior minister. Three months later, Abdullah named Khalid bin Bandar, a graduate of the British Royal Military Academy at Sandhurst, as the governor of Riyadh.

The latest move will “raise his son’s profile to a ministerial level so he is on equal grounds with relatives who already hold that rank,” Theodore Karasik, director of research at the Institute for Near East and Gulf Military Analysis in Dubai, said in a phone interview. “It also evens the playing field between the security services.”

Abdullah’s heir apparent is Crown Prince Salman bin Abdulaziz, who was born in 1935. Salman is also the kingdom’s defense minister. Prince Muqrin bin Abdulaziz was appointed in February as second deputy prime minister after serving as intelligence chief and a special adviser to the king.

Since the Arab revolts, Abdullah has been seeking to ease domestic problems with the potential to stoke similar unrest, such as unemployment. About a quarter of Saudis aged between 20 and 30 are out of work. The kingdom is investing $500 billion to build industrial cities in the desert and new airports and universities, as it seeks to create jobs and diversify the economy away from oil.